A small humanoid creature with a mischievous, toothy grin.

Gremlins are intelligent cavern creatures who are invisible until spotted, and cause various kinds of fun in your fortress by stepping on pressure plates, pulling levers, opening cages, picking locks and opening forbidden doors - it is recommended to not have gremlins and easily-accessible self destruct levers in the same fortress. One way of exploiting their lever-pulling behaviour is to have a lever that triggers a trap to kill the user when pulled, and leaving it in an area likely to see gremlins visiting. All gremlins are born with Competent skill in ambusher.

When a gremlin is discovered, the game pauses and centers on it, with the message: "A gremlin! Drive it away!".

Despite being intelligent creatures, gremlins possess the [PET_EXOTIC] token and can in fact be trained by your dwarves, provided you can bypass their natural immunity to most traps. They don't possess a pet value, which theoretically makes them worthless for keeping around your fort, but if you do manage to capture and train a gremlin, it could actually become your mayor. In fact, this is quite likely because the gremlin is not able to work, so it will spend all its time in your meeting hall making friends. After a certain period of time a trained adult gremlin will turn into a gremlin hunter and will then hunt alongside your hunters. This is because gremlins have natural skill in ambushing, which is associated with the hunting labour. Note that a trained gremlin will not pull levers anymore.

In the current version, a stray gremlin will claim a bed in the inn and become a long-term resident, eventually petitioning for citizenship. This can be mortally annoying, because they will then perform labors and ignore requests to be trained, resulting in trainers dying of starvation and thirst if you aren't careful. A solution to this is to make them exclusively soldiers, or assign them to a small burrow with a workshop exclusive to them, and make the area a training ground, which you can also order them to station in. Being trained isn't a job for the gremlin and it just has to be there; the trainer will eventually finish the job if the gremlin is in the same area. This no longer occurs with their tame offspring. This method can also work for other trained intelligent creatures if you've modded them to be pets.

Gremlins will not eat normally due to having the [BONECARN] tag, and their minuscule size makes them terrible at handling alcohol. They are also notably long-lived, with some living up to 1000 years. 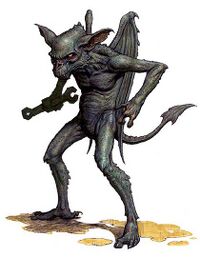 Gremlins can talk, and be recruited in adventurer mode, which is useful if one is trapped in a cave and cannot find animal people. Also, because they both inhabit the first cavern layer and are trainable, the dwarven caravan will offer their bodily fluids for sale, including gremlin blood, sweat and tears.

Don't expose them to bright light. Don't feed them after midnight. Don't get them wet.