Cassowaries are flightless birds found exclusively in tropical moist broadleaf forests. Despite being described as small, they are, in fact, nearly as heavy as an adult dwarf, though they are benign and will normally flee if provoked. In the event they fight back against dwarves, they will prefer to use kicks for self-defense.

Cassowaries can be captured in cage traps and trained into exotic pets. They give an acceptable amount of returns when butchered, and can also be put on nest boxes to lay a meager amount of eggs. Out of the flightless bird species, cassowaries are the longest lived, outliving ostriches and emus by about three times. 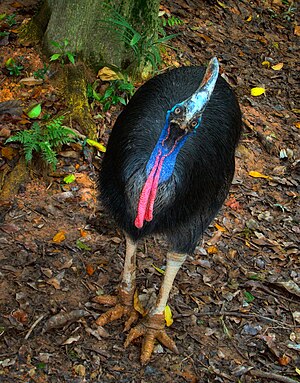 Admired for their casques.

Humans often tell tales of incredibly aggressive cassowaries, who can kick and tear apart just about anything that looks at them funny. According to them, the birds have one toe which is literally a spear, made specifically to murder innocents. Dwarves, who are master tamers of the animal kingdom, scoff at the idea of cassowaries being anything but fancy-coloured poultry, though the proposition of weaponizing their spear-toes (and possibly use their head-casques as axes) is an attractive one.