A spotted person with the head and tail of a cheetah.

Cheetah men are animal people variants of the common cheetah who can be found in savage tropical grasslands. They spawn in groups of 1-5 individuals and are not too aggressive, but may pick fights with dwarves who get too close. Much like their animal cousins, cheetah men are fast, running at 40 km/h, making them one of the fastest animal people on land. They are exactly the same size as dwarves.

There were to be no Cheetah Men, because the dwarves saw what happened last time and decided it would be unhealthy for the game's functionality. No midair dying was be implemented either. Additionally, Cheetah Men have no relation to any edible puffed cornmeal cheese products.

Sweet Armok, they tried to warn us. But now, it is too late. 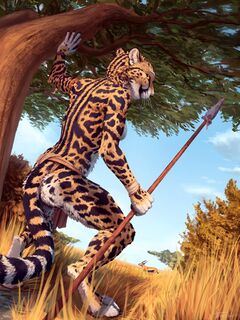