A green person with the head of a green tree frog.

Like other savage animal people, green tree frog men may occasionally join civilizations, becoming full-fledged citizens who may appear in your fortress as visitors or be playable in adventurer mode.

Some dwarves like green tree frog men for their distinct mating call. 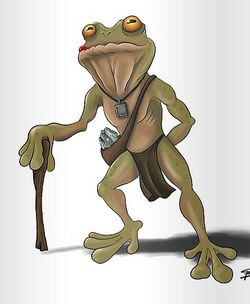 "Hop to it!" - Popular frog-related catchphrase.

Green tree frog men are observed to have extreme reactions or emotions toward topics. They often gather in large groups to talk about their life experiences and how they can't get a girlfriend.