Ocean sunfish are a species of huge fish who can be found in temperate and tropical oceans. At one ton, they're the heaviest species of Osteichthyes fish (fish with skeletons made of bone rather than cartilage) in real life, but are second to sturgeons in Dwarf Fortress. Due to their massive size, they provide a great amount of returns when butchered. As non-vermin fish, ocean sunfish can't be fished by fisherdwarves, but can be caught with the use of a drowning chamber. Infant ocean sunfish are called ocean sunfish fry.

Some dwarves like ocean sunfish for their size and their strange fins. 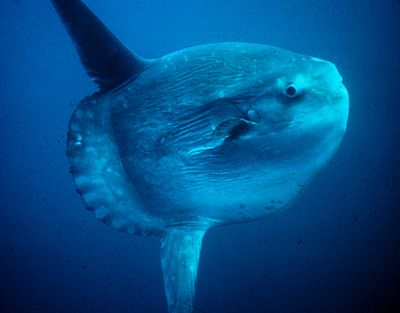 Admired for its size.
Retrieved from "https://dwarffortresswiki.org/index.php?title=DF2014:Ocean_sunfish&oldid=256167"
Categories:
Hidden categories: