A small snake found in the trees. It kills its prey by using its long body to constrict them.

Pythons are solitary creatures who can be found in tropical moist broadleaf forests. While described as "small", they are in fact the largest species of mundane snake in the game, twice the size of an anaconda and as heavy as a grizzly bear. They may attack dwarves or domestic animals who provoke them, but they don't carry any syndromes and aren't particularly aggressive. Like most other snakes in the game, they continuously grow through their entire lives, reaching their max size at the age of 20, though some pythons may die of old age as soon as they reach the age of 10.

Pythons can be captured in cage traps and trained into exotic pets. They are born adults and as such can't be fully tamed. They provide a poor amount of returns if butchered, but their females are prolific egg-layers, making them a good choice for egg production. Products made from python parts are worth twice more than those made from common animals. 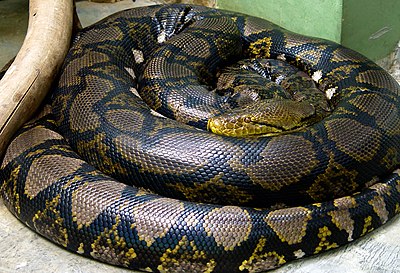