A person with the head and wings of a vulture.

Vulture men are humanoid versions of the common vulture and a species of animal people, found in savage deserts and tropical plains. They are only a little over half the size of an adult dwarf, being unlikely to pose a threat to a civilian's life, though they possess two significant traits: flight and the desire to steal your food. The former makes them difficult to attack, and the latter can be annoying to a newly-embarked fortress which has not yet yet settled up their food industry or made farm plots.

Like other savage animal people, vulture men may occasionally join civilizations, becoming full-fledged citizens who may appear in your fortress as visitors or be playable in adventurer mode. 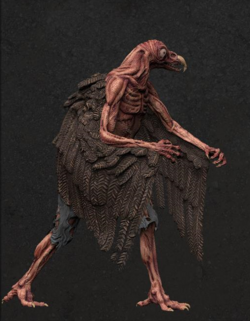 No less thieving than the flying kind.
Art by SupportCOMMAND

A guide to Vulture Man culture and traditions by Kivish Aughra: