A huge herbivore with thick plated skin and powerful build. It is known for the thick horns on the end of its nose.

Rhinoceroses are creatures found in tropical plains, where they appear in herds of 3-7 individuals. These massive animals are among the largest mundane land creatures in the game, essentially being smaller elephants, though they're benign meanderers who are more prone to fleeing from dwarves than attacking them. If pushed over the edge, though, a rhinoceros will be quick to turn a dwarf into paste under its weight. A newborn rhinoceros is called a calf.

Rhinoceroses can be captured in cage traps and trained into valuable exotic pets. They become grazers after being trained and as such require a pasture, and due to their great size, they require a significant patch of grass. They can receive additional war training as well, which will remove their benign demeanor and turn them into one of the strongest war beasts you could possibly have, though their [MEANDERER] tag will cause them to move around very slowlyBug:9588. They also make excellent livestock, as a butchered rhinoceros will provide plentiful returns which are worth five times more than those made from common animals. Rhinoceroses take 10 years to reach maturity, though they're fully grown by the age of 5. Additionally, they are exotic mounts and as such can show up being ridden by surface races during sieges, which can provide much fun to an unprepared fortress. 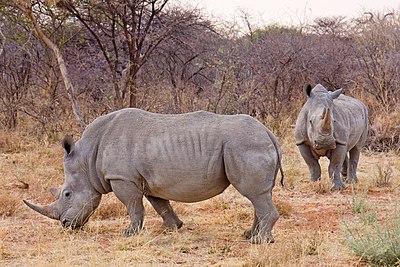 Admired for their horns. 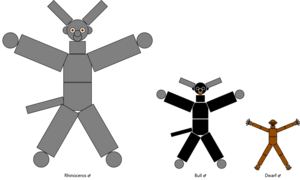