A person with the head and flippers of an elephant seal.

Elephant seal men are animal people variants of the common elephant seal who can be found in savage arctic oceans. They spawn in groups of 5-10 individuals and can easily dispose of dwarves who provoke them thanks to their enormous size. Much like their animal versions, elephant seal men possess notable sexual dimorphism; males are about as large as a walrus, while females are only about as large as a horse (being nonetheless much larger than dwarves).

Like other savage animal people, they can join civilizations, become historical figures, appear as visitors and be playable in adventurer mode. Due to their size, elephant seal men (especially males) can make strong adventurers. However, their large size also leaves them unable to equip generated armor, a problem many animal people have in common. Their amphibious nature is an interesting bonus, allowing for exploration of the usually-foreboding ocean.

Some dwarves like elephant seal men for their large floppy noses and their great size.

It is unknown if the cuteness of elephant seal pups is retained in their humanoid cousins. 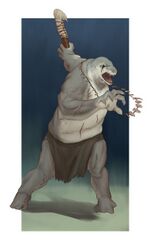