A huge monster that lurks in caverns deep under the earth. It uses its wide beak to reach down and pluck up unsuspecting intruders.

Jabberers are colossal flightless birds who live at the deeper levels of subterranean caverns - the much nastier cousin of the elk bird. These carnivorous beasts, nearly the size of an elephant, prowl the underground while terrorizing anything that approaches them, these usually being hapless dwarves who just happened to take the wrong turn on their hauling job. The typical result of a civilian stumbling into a jabberer is a new body for the fortress' cemetery.

Jabberers are a threat due to their great size; they are among the largest creatures in the underground (losing only to blind cave ogres, forgotten beasts and cave dragons) and will use all of their strength to tear through unarmed or inexperienced dwarves. When facing jabberers, a powerful military is essential, though they are also equally vulnerable to cage traps. The creatures are also an uncommon sight in goblin sieges, where they are used by the enemy as mounts.

Jabberers possess a pet value of 1,500; one of the highest in the game, and the great amount of returns they give when butchered means players should consider them more valuable alive than dead. Should a jabberer couple be captured and assigned to a nest box, they can be used to steadily provide the fortress with a force of giant, bloodthirsty and delicious bodyguards. Jabberers can be trained not just as pets but also as war and hunting beasts, and products made from their parts are worth four times as much as those made from common animals.

Unlike most animals, jabberers can't be spawned in the object testing arena. 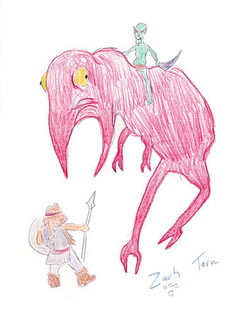