A person with the head and neck of a giraffe.

Giraffe men are animal people variants of the common giraffe who can be found in savage tropical shrublands and savannas. They spawn in groups of 5-10 individuals and generally do not start fights of their own volition. They are almost nine times larger than the average dwarf.

Some dwarves like giraffe men for their long necks. 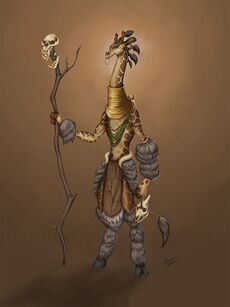 Has no trouble seeing over things.
Retrieved from "https://dwarffortresswiki.org/index.php?title=DF2014:Giraffe_man&oldid=254874"
Categories:
Hidden categories: