A gigantic monster in the shape of a sperm whale.

Giant sperm whales are really, REALLY giant—they are even bigger than a real-world blue whale. They produce truly enormous stacks of animal products, which can reach over 13,000 total units worth of food; butchering one will feed a 100-dwarf fortress for a bit more than ten years—if the corpse doesn't rot halfway to the butcher's shop, of course. Giant sperm whales are the largest creatures in the game by a wide margin; they are eight times the size of a dragon, ten times that of a bronze colossus, about 380 times the size of a fully-grown bull moose, and about 3,330 times the size of a measly dwarf.

Hunting giant sperm whales is not easy due to their aquatic nature (and their sheer size). They can be captured with a fish-catching chamber and then air-drowned; out of the water, a giant sperm whale will turn into a corpse relatively quickly. They will also occasionally beach themselves, leaving a corpse ready for the butchering by lucky dwarves.

If you happen to embark on a Terrifying ocean, you may run into undead versions of these. If you do, pray Armok will have mercy, because this thing will have none. Be sure to tell the forum how much fun you had as well!

Like normal sperm whales, giant sperm whales have a 1/101 chance of being born with white skin instead of the usual gray.

Some dwarves admire giant sperm whales for their vengeful nature and their teeth. 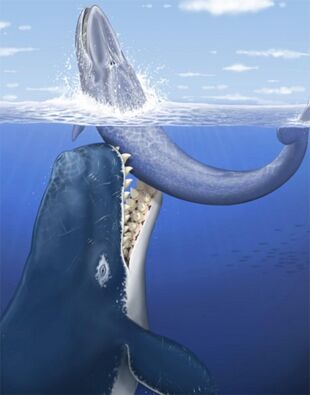 It is rumored that giant sperm whales can only be slain by throwing iron spears into their heads. Giant sperm whales also tend to rip off limbs for no reason, and thereafter the surviving dwarf may start a grudge with the whale that may spell doom for dozens of dwarves.