A medium-sized creature with the arms and torso on a man, but with the head and tail of a narwhal.

Narwhal men are animal people variants of the common narwhal who can be found in savage arctic oceans. They spawn in groups of 5-10 individuals and are generally content to keep to themselves. In terms of size, they are over ten times heavier than the average dwarf.

While they can learn and are able to join civilizations, they never do so, as they are completely aquatic and cannot survive on the surface. 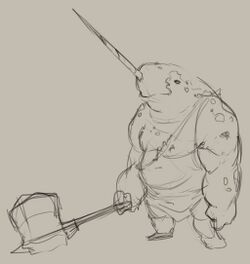 Despite rumors, narwhal women are incapable of generating forcefields.