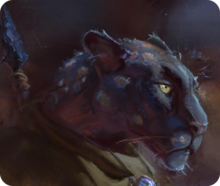 Animal people are half-man, half-beast creatures with various animal-like traits, some beneficial (such as flying, and poisons), or detrimental (thievery), inherited from their base animal. They generally have significantly longer lifespans than the base animals, as well as the ability to learn. They can be legless, but get arms even if their base animal is limbless. Their body size is the average of their base animal's size and 70,000 (the size of a human), working out so that the smallest animal people are 35,000cm³, half the size of a human, but they can get very large. Animal people can join civilizations and live in sites, or come to your fort as visitors.

Animal people are playable creatures in adventure mode. If they became established members of a playable civ (dwarf, elf, human), they will appear listed in the creature selection screen alongside the main races. Otherwise, they are selectable under Intelligent Wilderness Creature. Some animal people may not be available due to having died out or being uncontacted (e.g. excluded to an isolated island).

Wild animal people wander on the surface in savage environments or dwell underground in the caverns; these two populations form distinct groups. Subterranean animal people are actually a civilization in themselves, rarely encountered, in small groups or "tribes". They are equipped with primitive weaponry such as wooden spears and blowguns (they are the only known source of blowdarts). Subterranean animal people will be labelled as Hostile upon discovery – they are not interested in negotiations, and will attack your dwarves on sight. Encountering them often comes as a surprise, since there is no way to know about their presence before embarking. They do not appear in the civilizations menu.

Being an entity in their own right, subterranean animal people possess ethics; much like other civs. Those particular ethics are incomplete for now — being directly copied from kobolds and their values all set to zero (none).

Like kobolds, subterranean animal people consider the killing of other living beings acceptable, but treason is unthinkable, and they'll respond to the murder of their own kind by exiling the offender from their tribe. They oppose torturing for information and the torture of animals, but consider torturing for fun appropriate. Assault is considered a personal matter, while slavery, the taking of animal trophies, and the consumption of sapient beings (which includes other animal people) are all unthinkable acts.

@ Probably only functions as a citizen in Fortress Mode[Verify]

+ Probably only functions in Adventure Mode[Verify]

(All animal people have the Learning and Humanoid Attributes)

Present from the first official release of the game, the animal people did not exist as a class but were instead part of a small group of subterranean creatures that harassed your dwarves. Frogmen, lizardmen, and snakemen emerged from cave rivers, and antmen, batmen, and ratmen would come out from chasms to attack.

In v0.31, every creature was renamed and/or had their properties revamped (for example, "frogman" was changed to "amphibian man" and "batman" was changed to "bat man"). Not all animal people were redefined in this version, and some continued to use old codes for many releases. The version also introduced "creature variation" templates, which made converting existing animals to humanoid (and giant) variations much more efficient. Underground features were expanded to the current caverns, and subterranean animal people formed civilizations. More anthropomorphic variations of animals present at the time were added.

More animal people were added to the game in v0.34.