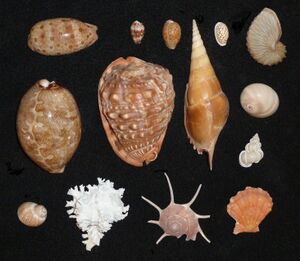 A shell is a hard external covering used by certain creatures for defense.

In most cases, they are acquired as part of your fishing industry: dwarves may catch shelled vermin critters such as turtles, oysters, and mussels, which produce a shell when processed at a fishery. These creatures will also leave behind their shells if left to rot long enough after being caught. Alternatively, a few larger land animals (giant snails, some forgotten beasts) also produce shells when their corpses are processed at a butcher's shop.

Be aware that shells cannot be acquired via trading -- any turtles, crustaceans, or shellfish purchased from traders have already been processed and had their shells removed. As a result, fortresses with no naturally occurring above ground fishing sites usually never acquire shells. This can cause problems if a shell-preferring moody dwarf requests shells as a material. To avoid the risk of dwarves attempting to make impossible artifacts, you can catch pond turtles by having fisherdwarves fish in an outdoor pond. As long as there is a population of pond turtles in the area, your fisherdwarves will eventually catch some, which can be shelled in a fishery. This process takes time, however, so make sure you do it before the strange mood strikes. Alternatively, you could use an adventurer to import shells from another location.

Shells can be worked by a dwarf with the bone carver skill. They can be used for many of the same purposes as bone, such as in making crafts, decorations, and cheap, lightweight, low-defense armor (leggings, greaves, gauntlets, and helms only). Notably, unlike bones, they cannot be used to produce bolts.

Shells can be stored in a refuse stockpile. Stored shells will decay over time due to vermin, but even a small fishing industry can produce many shells very quickly. As such, having a bone carver on hand to convert them to trade goods can be an effective way to generate wealth early on; even though shells have a low innate material value, quantity can win out over quality here. Also, shell armor is better than nothing and doesn't slow down your military like metal armor does -- consider producing some early on if you can't immediately acquire metal armor.

In previous versions, shells were frequently requested by moody dwarves, and difficult if not impossible to obtain. As of the current version, only dwarves with a preference for shells will demand them for artifacts. Shells are still hard to come by, though, so players occasionally mod the game to make sure their fortress will have shells available.

The combination of the common requirement for shells during Strange Moods, the bug that causes shell-producing fish to be unavailable in many maps, and the inability to trade for shells may lead to unresolvable Strange Moods. It is possible to modify the raws to allow other creatures to produce shells, if the player is so inclined:

Slaughtering a cow should now produce a "Stray Cow shell" usable by dwarves stuck in strange moods. Pay attention, that editing creature after creating world may cause later crashes when changing game's version. In fact, after porting the save to the modified version, the game will crash every time your dwarves try picking up the skeleton that previously had shell. It's strongly recommended to use the second way, as it doesn't add any new body part to creatures, but only add new way of using already existing body part, which is much less crash provoking.

Enabling other materials to be used in moods[edit]

If you don't want to add shells to existing creatures, you can enable other materials, like hooves or ivory, to be used in strange moods instead of shells. The only effect is that the materials will be available for moods, you won't be able to e.g. make shell crafts of them.