Ice is frozen water, appearing as a light blue stone which can be found by mining through an ice wall (such as that created when a river freezes). Ice boulders and objects made of ice will melt after some time when exposed to warmer temperatures (such as below ground), giving it rather limited use; ice boulders can even melt while being carried by your dwarves, causing them to drop the item and resulting in a smear of water on the floor beneath them.

It is possible to build constructions out of ice, even underground (provided your dwarves move quickly enough to finish construction before the ice melts). These constructions are then stable even as temperature rises. Pillars of ice walls can even be built within rooms that are later flooded with magma (though the walls become "warm", they will not melt).

Attempts to build underground workshops, paved roads, or other non-construction buildings out of ice will usually result in the ice melting immediately, the message "The dwarves were unable to complete the [workshop_name]", and the workshop construction being canceled completely. Ice buildings can be constructed aboveground during freezing weather, though they will melt during the spring/summer thaw, or if their central tile is warmed (e.g. by fresh homeotherm corpses in an ice butcher's shop).

Ice cannot be used to craft, nor is it possible to create doors, hatches, and other crafts from it.

The game refers to ice boulders as "water". It does not appear in any stockpile options or the manager, so it cannot be moved by designating a stockpile, but rather by dumping it. When an ice boulder melts underground, it becomes an item named "water" that differs from regular water in such fashion: it has no liquid level, does not leave mud when it evaporates, is cyan rather than blue, and dwarves eventually remove it with a "clean" job. Melted ice boulders cannot be used as a water source.

A boulder of ice is worth 3☼ if traded, and weighs 92Γ. 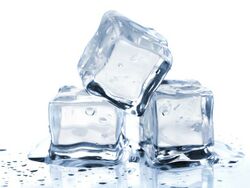 An ice bridge cast in place across a chasm.

Only one fill pond job will be created for each pond zone, so multiple pond zones will speed up casting. These additional zones can simply overlap each other, or you can separate them into distinct areas, such as a series of 10x1 zones. Once any pond zone is completely cast, you will start getting cancellation notifications that they cannot fill the pond. At that point, you can just delete the zone and the fill pond job goes away on its own.

Make your water source as close as possible to the construction site. It needs to be underground so it doesn't freeze, but closer means things get cast from ice more quickly.

Water in buckets will last for a surprisingly long time before freezing in the bucket as a chunk of ice-it's really not an issue unless the bucket is dropped and left outside. If the bucketful of water does freeze, just order the ice to be dumped, and the chunks of ice will be taken to your garbage zone. Note that this is affected by the temperature — for example, water in buckets in a glacier biome will freeze much more quickly than if the same water and buckets are in a cold temperate biome.

Put your bucket stockpile right next to the water source, and produce a large number of buckets to ensure there is always another bucket to be filled.

You can cast ice over a ledge. First the ice floor, and then the ice wall, is cast at the Z-level right below the pond zone. This means if you're dumping buckets of water off of a 2 Z-level high wall, you will be forming a solid ice roof and the area underneath will be completely ice free, and even safe to walk over as the ice is being cast over their heads.

Cast ice may "float" entirely unsupported for an extended length of time, however, it will eventually cave-in when support is checked.

You can cast ice walls on the edge of the map, however the edge tiles can only be cleared of ice by melting. The effects on creatures spawning there are unknown.

In fortress mode, if a frozen murky pool thaws, it will do so instantly. Any dwarf standing on the ice will plunge into the water and drown (unless they have Adequate or better swimming skill, the fall will stun them). To reduce the chance of this happening, you can use traffic designations: mark the ice as restricted, and put a high traffic ring around the perimeter of the pool. Or, if you don't need to fish from it, you can construct a wall around it or a floor over it.

Running magma under unmined ice will melt it. This appears to be the best way to turn large amounts of ice into water to use as a water source, when all you have is ice and magma.

Creatures that are extremely hot, such as magma men, will melt unmined ice around them, which can potentially lead to fun.

Using the "smooth stone" and "carve fortification" designations works as normal with ice. However, if an aquifer or other source of water is present next to your new fortification, it will immediately freeze into an ice wall when the water flows into it.

The freezing/thawing of ice deconstructs anything occupying the same space as the block of ice, including floor hatches, grates, wells and supports built in the z-level above it (because the frozen ice wall below creates an implied frozen ice floor above). It also has the potential to trap dwarves in ice, instantly killing them. Extreme care must be taken when releasing water from behind ice blocks.

As in fortress mode, an adventurer standing in a water tile as it freezes will be killed. However, it is possible to walk across frozen oceans to reach islands and continents that otherwise would be inaccessible.

Water carried in any container carried by an adventurer will freeze, if brought to a cold enough area. Frozen water cannot (obviously enough) be drunk to fulfill thirst needs, so it is necessary to thaw it.

You can also obtain a drinkable water supply from melting snow like this.

If a structure is supported by ice which then melts seasonally, the game does not check to see if the structure should collapse, resulting in a building hovering over the now-melted ice.Bug:227

Removing an ice ramp can create "void" tiles.Bug:1981 Casting ice in the tile and then channeling the tile can remove the "void" status.