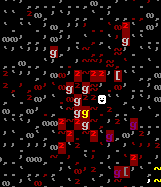 Ground smeared in blood, coming straight from the source.

Blood is a contaminant and the preferred fluid of Armok, as well as the fluid that most living creatures contain within their bodies. It is unfortunate that losing this fluid tends to be invariably fatal to those who possess it.

Blood men are creatures made out of blood, and vampires require it to satiate their thirst needs.

Note: May include pain.

Much like other contaminants, blood tends to spread everywhere Bug:296. Dwarves walking on tiles with a blood smear will spread it to the next tile, where it will form a spattering of blood, then a smear, which is why bloody areas tend to grow quickly above ground when heavily trafficked. While dwarves with the cleaning labor enabled will normally remove blood splatters on the floor, they have a tendency to leave walls dirty. Allocating bloody indoor underground areas as a meeting area seems to increase their cleaning priority and they will get cleaned pretty quickly if you have enough idle workers. However, this does not seem to work for aboveground areas and in fact has the opposite effect. It is possible to remove blood from a soil floor by building a dirt road on it.

Brooks and similar sources of water replicate any blood that falls on their tiles, resulting in an endlessly-growing carpet of blood. This can be dealt with by covering the offending brook tiles with walls or floors. It is better to forbid an area with blood in aboveground areas as rain will randomly clear tiles where it touches it. To be rid of blood splatters on a rough wall, designating the splattered area to be smoothed will make it disappear.

A setting in d_init.txt permits disabling the spreading of contaminants, including blood.

Beyond the obvious method of injuring creatures, barrels full of blood can be brought with a dwarven expedition upon embark, and bought from dwarven and human civilizations during trading. Barrels of blood possess no use beyond being trade goods (making buying them redundant at best and a waste of dwarfbucks at worst, unless you are using it as a currency). Player-controlled dwarves are not able to create blood barrels.

Selecting blood inside a barrel for dumping does not empty the barrel. Using the workaround for dumping liquids from lye buckets works - view the contents of the barrel, select the blood and forbid or dump it. Alternatively, forbid/dump the blood from the stocks screen in 'liquids' then order the barrel to be brought for trading at the depot.

As with all other contaminants, blood created from injured creatures can't be used for anything (beyond morbid decoration) with the exception of the smeared blood of a vampire - drinking vampiric blood will turn the person into a vampire themselves. Blood smears located indoors will automatically be cleaned by passing dwarves, while those located outdoors will remain there until cleaned by some external factor like rain.

Not all creatures have the same dark red blood that most do:

Inorganic creatures such as the bronze colossus, the magma man and the amethyst man don't have blood, including particular organics, such as sponges and their variants, similarly for some types of undead (skeletons or animated skin).

Some creatures, when injured, may leave residue like a normal creature would bleed, but not actual blood. For example, a titan made out of salt may leave piles of salt where it was injured.

Blood makes a significant impact during combat. A strike which causes damage to major arteries can open them, leading the creature to begin bleeding out rapidly. Without any treatment, the wound may eventually cause the creature to die of blood loss, even if it isn't struck down by any other means. This is especially important in adventurer mode, where the impact of blood loss is more noticeable. This type of death is common with creatures who get their limbs severed from their bodies.

Most syndromes are contracted when the poison enters the victim's blood. Certain sicknesses (such as iron man cough) include coughing or vomiting blood as symptoms, which may lead to bleeding damage on the afflicted individual. These are usually not fatal, but may lead to the person being left vulnerable in the face of danger. Certain creatures will suck the blood out of their victims upon landing a bite attack (such as female mosquitos, leeches and nightwings). This is largely irrelevant with vermin (who can't interact with other creatures anyway), but may be a problem when dealing with their savage humanoid/giant counterparts.

Creatures with no blood pose a greater challenge to kill as they can't die of blood loss, and they will continue to fight no matter how much damage they suffer to whatever it is they're made of. Giant sponges were particularly famous for this.