Venom is a naturally-occurring poison that will cause a syndrome in certain creatures when certain conditions are met, typically when entering the blood via a serpent man or giant cave spider bite. It is produced by certain creatures according to their raw file, and may be extracted and stored in vials.

Each specific animal's venom delivers a specific syndrome, which is a known combination of symptoms, some short-term, some long-term, and some (in rare cases) permanent (aka "chronic"). Some few syndromes (such as gila monsters') are seen as mild annoyances, some (such as a giant desert scorpions') are a death sentence, but most are a mortal threat, at least. Of the wide of variety possible symptoms, one of the mildest is nausea and vomiting, but even that can dehydrate a dwarf and take them out of combat while they seek to quench their thirst. The most immediately dangerous venoms cause paralysis, which can stop the lungs, leading to suffocation. Most any bite that causes strong pain can in turn cause unconsciousness, leaving the victim helpless in combat, which is rarely survived. Longer term, blisters can lead to deadly infections, and necrosis (which causes tissue to die) of any body part can also lead to eventual death, but the usual treatment, amputation, is not much better. Even mild dizziness can be a death sentence to any dwarf who works or travels near magma, water, or long falls (and do any not?). There are few venoms that can't kill an unlucky dwarf, one way or the other; if your fortress has many venomous creatures nearby, have some coffins ready.

Currently, it is disputed whether or not venom can be administered, but it may still be purchased or sold.

Research has shown that in at least some circumstances, venom and other syndrome-inducing materials can be spattered or covered upon weapons and bolts, which may result in attacks inflicting the related syndromes. [1]

Some forgotten beasts and titans are generated with venom, which they can inject through bites or stingers, alternatively covering their bodies entirely, or making their blood toxic. 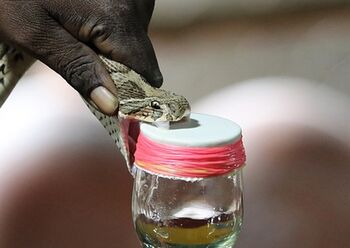