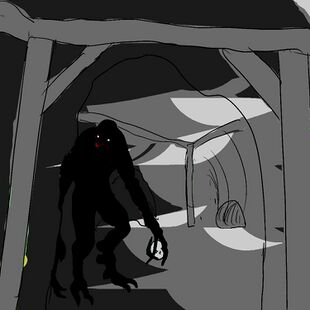 Night trolls Ñ are a type of procedurally generated night creature. They are supernatural monsters which kidnap non-goblin civilized beings, transform them into spouses, and then mate with them to produce young. The children are all the same sex as the original night troll, never that of the spouse, except if they breed somehow in fortress mode. In adventurer mode, night trolls and their spouses can be given as the targets of quests. They are not related to normal trolls.

A number of different types of night trolls are procedurally generated at every world creation, similar to bogeymen and titans. Their numbers are normally dependent on world size, but can be directly controlled with advanced world generation - a world seed with "Number of Night Troll Types" set to 0 in advanced world generation will not have any night trolls in it. Not all night troll species are named as such - the possible names, apart from words indicating night, evil, or darkness, include crone, freak, hag, horror, man, monster, ogre, ogress, troll, and woman. Night trolls belong to the spheres of death and night, and will be named appropriately.

While procedurally generated, night trolls all possess certain characteristics in common: They are all fanciful, evil-aligned humanoids with either extra or missing features; for example, large feathered women, or large skinless one-eyed men with horns and trunks. Some night trolls possess wings which give them flight, though they will only use them to fight adventurers who are also flying. Their description always gives their movement method (e.g. moves with uneven, jerking motions) and detailed descriptions of their skin (smooth, rough, warty, leathery, etc.). Their lairs are mounds or holes in the ground with doors or hatch covers. Depending on the night troll, they can contain various tools (knives, forks, meat cleavers), small amounts of discarded coins and clothing from their victims, corpses, organs or skeletons of sentient creatures prepared as food, cauldrons of blood or water with various food (meat, bones, full skeletons, vermin remains, rarely parts of armor), bone meal, and ground vermin, victim skulls as trophies. Most night troll lairs are inhabited by a single creature, but sometimes you'll encounter entire families of five or even ten. The night trolls' lairs, according to Toady One, have a unique tag that causes items placed there to not be scattered around or rot.

All night trolls possess Talented skill in wrestling, biting, fighting, striking, kicking, dodging and observing, on top of possessing bonuses to all body attributes. Night trolls can breathe underwater, feel no exertion, cannot be stunned and are immune to pain, nausea, dizziness and fevers. Night trolls need no food, water or sleep to survive, nor do they need to breathe, meaning they cannot be drowned or strangled. Interestingly, their raws also reveal an immunity to traps, the ability of destroying buildings and a pet value of 2,000; due to existing in fortress mode only if the player embarks on their lair, night trolls almost never get to destroy buildings or interact with traps, and they don't possess the necessary tokens to be trained (but some species of night trolls are SLOW_LEARNER and very rare, possibly because bug, could become minions of goblins). All night trolls can sense unseen living creatures as ☼ in a similar manner to vampires, though this cannot normally be observed, as night trolls are not a playable race.

The size range of night trolls is unknown, but it is known to vary greatly, from slightly bigger than a dwarf to as large as an adult deer. Spouses are sometimes smaller than their captors, but this depends on the night troll species. Adventurers are able to smell night trolls with o, with them being described as smelling variously like "death". "cooked flesh" or "bug innards".

Dwarves may like a species of night troll for their macabre ways.

As stated above, night trolls must kidnap a non-goblin civilized being and transform their victim into another night troll of the opposite sex (the process by which this is done is not known, nor is the reason why it cannot be done on goblins) in order to reproduce, but what is curious is that the kidnapping troll can be either male or female, and a given world is easily capable of having multiple trolls of both sexes. The reason why night trolls seek out victims to kidnap in the first place, instead of simply breeding amongst themselves is unknown, but the fact that night troll young are always the same sex as the non-kidnapped parent suggests there may be some sort of issue with attempted reproduction between "natural-born" night trolls (the offspring being sexless, unable to come to term, etc). Since night trolls are heavily implied to be sapient, there could also simply be a cultural stigma against mating with a night troll you didn't kidnap and transform yourself, although if this were the case it would raise the question of why they have their transformation ability in the first place.

It is not known whether spouses can mate with another spouse of the opposite sex (or even with any night troll at all, aside from the one that transformed them), although this would of course be quite a rare event even if possible. Whether spouses can kidnap and transform spouses of their own (such as if the night troll that originally abducted them dies) is also unknown.

An interesting aspect of night troll reproduction is that it qualifies as a Genetic Barrier, meaning that natural-born male night trolls and natural-born female ones would eventually diverge into separate species if genes and mutation were added as game mechanics, since a mutation that arose amongst one sex would have no way of making it into the gene pool of the other.

If night trolls give birth in fortress mode, the children will be friendly. Night trolls will not haul their babies, except if dfhacked into being a citizen of your fort.

Night trolls are somewhat-challenging opponents in battle, but not particularly dangerous if encountered alone: since they are fairly large, wrestling them is quite difficult though still possible, and they are a bit harder to harm with blunt attacks than humans. In addition, they are immune to pain and do not need to breathe, so they cannot be made to pass out and will not suffocate.

Night trolls can, rarely, wield one of the butchery tools generated in their lairs – like boning knives or meat cleavers. Usually they will attack unarmed and can, due to their large size, cause serious harm with their punches, kicks and especially bites. In fact, bites are their most dangerous attack, so if the night troll in question has a weapon, you'd better harm its respective arm or spine last, since weapon attacks always have highest priority for them, while their most common weapon choice is a mere small knife. Be especially wary of trolls and other night creatures that also possess horns.

They can die from blood loss, brain damage, beheading and bisection (cutting off the lower body). They never wear clothing or armor, and, therefore, are quite susceptible to having limbs cut off - hacking and slashing attacks work remarkably well against them.