A small rodent covered with sharp quills. They eat grass and leaves and can even climb trees.

Porcupines are small, solitary creatures found in a wide variety of biomes. They are entirely benign and spend their time roaming your surroundings aimlessly, being easy prey for anyone who attempts to confront them. Their bodies are covered in spines which, while not actually harmful to the touch, do provide them with more insulation than most other animals. A newborn porcupine is called a pup.

Porcupines can be captured in cage traps and trained into exotic pets. Due to their small size, they provide few returns when butchered, less than even dogs, making them poor targets for a meat industry. Butchering a porcupine will also create a single unusable spine which serves only to occupy space in your refuse stockpile. 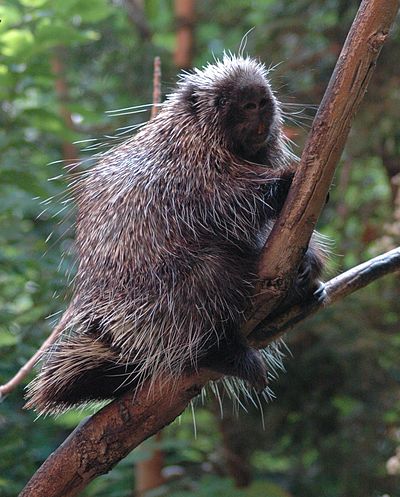 Admired for its quills.

Some porcupines are found with red fur, and a lot of dandruff, they also fear everything, and some of them die horible deaths. Anyone for skiing?