A person with the head and tail of a coyote.

Coyote men are animal people variants of the common coyote who can be found in a wide range of savage regions. They spawn in groups of 2-10 individuals and are generally content to keep to themselves, but may attack if approached. In terms of size, they are a little over half the weight of the average dwarf. 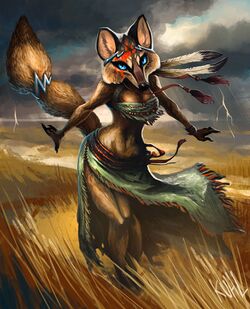 Coyote men do not fixate on catching and consuming road runners, nor do they purchase or create any kind of traps to do so.