A creature that crawls along the cavern ceiling with four long arms. Its body is shaped as the head of a man with a mouth full of shark teeth. It waits for its prey to pass below.

Maneras are rare, evil-aligned, four-armed creatures found in subterranean caverns, exclusively at the second layer. They spawn one at a time and lurk the underground, occasionally pathing to your fortress and attacking dwarves who may cross their way. Maneras are the size of a dwarf and may prove a threat to civilians, but an equipped military squad will make quick work of them. All maneras are born with Legendary skill in climbing.

Maneras are intelligent creatures capable of learning at half the speed of a civilized one, but are not capable of speech. Because of this, dwarves will not butcher them, limiting their use to live training and occupying space in your refuse stockpile. They can't be spawned in the object testing arena.

Extremely rarely, they can be part of the same goblin servile underclass as trolls, ogres and blizzard men.[Verify] 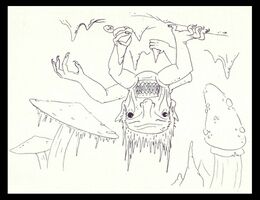