A humanoid with the head and antlers of a moose.

Moose men are animal people variants of the common moose who can be found in savage temperate forests and taiga. They spawn in groups of 5-10 individuals and, like their animal counterparts, possess notable sexual dimorphism; moose women are about as large as a llama, while moose men are about the size of an elk. Because of their large size, dwarves who provoke them stand little chance unless they happen to be soldiers.

Some dwarves like moose men for their broad antlers and large size.

They are often found in the company of flying squirrel men. 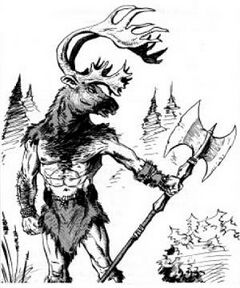