A humanoid with the head, feet, and feathers of a penguin.

Penguin men are humanoid versions of the common penguin and a species of unremarkable animal people, found in savage arctic oceans. They are only a little over half the size of an adult dwarf, and as such are unlikely to pose a threat to a civilian's life.

Like other savage animal people, penguin men may occasionally join civilizations, becoming full-fledged citizens who may appear in your fortress as visitors or be playable in adventurer mode.

Some dwarves like penguin men for their coloration, their waddling gait, and their way of flying through the water. 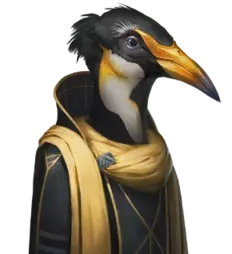 Penguin man from the game Stellaris.

It has been rumored that one penguin man has been seen in a tuxedo, wearing a top hat and an umbrella. Rumor has it that he lives in the sewers, with a bunch of clowns and many penguins. He is the nemesis of a certain bat man.