A humanoid creature with the head of a blind cave fish. They live in colonies in watery regions far underground.

Cave fish men are humanoid versions of the cave fish and one of the many underworld tribal races of animal people, living on any cavern level milling around piles of meat and tanned hides. They stand at roughly half the size of an adult dwarf.

Like many underground races, the danger of cave fish men is not to be found in their wooden weapons, but in the substances found smeared on them. Cave fish men use many poisons, some of which can be deadly. They will launch group attacks on your fort, and have the ability to swim through your reservoirs and launch amphibious assaults on your fisherdwarves. Cave fish men sometimes spawn in the taverns of human towns, almost always causing deadly brawls.

Some dwarves like cave fish men for their beauty. 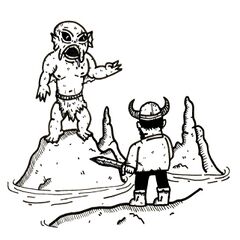 Some cave fish women have shown preference for using spears and have even been observed wearing full metal armor. A small number of dwarves with silly accents have been noted wanting to marry said cave fish women.