These evil creatures resemble walking frogs with arms and the intelligence to use them. They live in the waters far under the earth.

Amphibian men are one of the many underworld tribal races of animal people, and can be found on any cavern level milling around piles of meat and tanned hides. They are equivalent in size to kobolds, but are less agile.

Like many underground races, the danger of amphibian men is not to be found in their wooden weapons, but in the substances found smeared on them. Amphibian men use many poisons, some of which can be deadly. They will launch group attacks on your fort, and have the ability to swim through your reservoirs and launch amphibious assaults on your fisherdwarves. Despite their description, they do not possess the[EVIL]token and are not any more malevolent than any other race of animal people.

Some dwarves like amphibian men for their terrifying features. 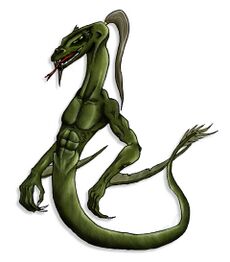