A small, intelligent vermin with a long naked tail.

Rats are a type of hateable vermin found in any area that isn't freezing. They like to consume your fortress's food, bones, and shells, and may inspire unhappy thoughts in any dwarves that encounter them. They sometimes appear in large swarms, and are automatically hunted by cats. They can be captured by trappers and turned into pets, but care should be taken if doing that while possessing rat-hating dwarves among your population.

Some dwarves like rats for their friendliness, their playfulness, their curiosity and their intelligence. 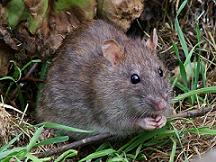 Admired for its friendliness.

When a rat becomes a pet, it has a very low chance of getting the legendary cooking skill, and will puppet its owner by pulling the hair of their owner's beard. Doing this will allow it to cook more efficiently while not gaining any suspicion.