A large humanoid monster from the wild tundra. It has translucent skin, icicles for teeth, red glowing eyes and pointed ears.

Blizzard men are a species of intelligent and very rare creature found in evil-aligned tundras and glaciers, who spawn one at a time. Weighing more than a troll, these beasts are aggressive and will attack any dwarf who approaches them (or at least are supposed to, but currently don't Bug:10031) with punches, kicks, scratches and bites, and should be disposed of with an equipped military squad or traps. Unlike other construct creatures like the subterranean gabbro man or fire man, blizzard men are not building destroyers, though they are capable of opening unforbidden doors. Killing a blizzard man in adventurer mode grants more experience than other normal creatures.

Despite what their description may imply, blizzard men are not made of ice, instead being made of normal flesh. However, a note on their raw files states Toady One plans to make them be made out of ice in a future update. Even though they aren't made of ice yet, blizzard men possess the [NO_THOUGHT_CENTER_FOR_MOVEMENT] token, meaning they don't need brains to survive (though they'll still die instantly from decapitation). Due to the aforementioned intelligence, dwarves will not butcher, eat or use products made from blizzard men, limiting their use to occupying space in your refuse stockpile, live training or putting them somewhere of your liking if you capture one in a cage trap.

Some dwarves like blizzard men for their translucent skin, their icicle teeth, their glowing red eyes and their pointy ears. 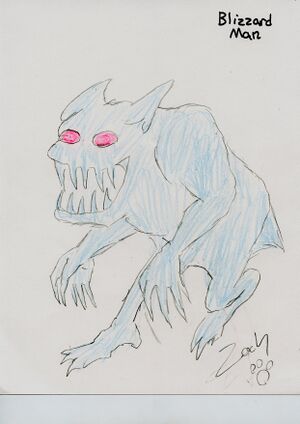 A blizzard man, drawn in crayon by Bay 12 Games.

It has been posited that the best way to keep blizzard men out of the fortress is with an exceptionally large wall.