Nightmares Ñ are procedurally-generated, fanciful night creatures summoned by necromancers and demons[Verify] to fight in battle, larger than your standard humanoids, but smaller than titans and forgotten beasts. They are short-lived, and neutral to creatures with [NO_FEAR]. Nightmares summoned in fortress mode will be friendly. When summoned, nightmares will possess Talented skill in observing, fighting, wrestling, biting, striking, kicking and dodging. They do not need to sleep, eat or drink, feel no pain (though still have nerves that can be damaged, therefore affecting motor function), cannot be stunned, feel no fear, completely avoid traps, don't need to breathe, or feel dizziness, nausea, and never get tired from over-exertion.

Since they are procedurally generated, their in-game appearance (which can be seen by spawning them in the object testing arena) will vary by world, but will always end with: "Now you will know why you fear the night." By default, there are multiple nightmare types per world, and the number can be set in advanced world generation.

All nightmares are linked with the spheres of misery, night, and - unsurprisingly - nightmares.

Some dwarves like nightmares for their unfathomably horrifying nature. 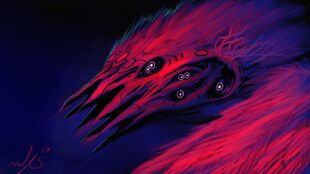 Too much for the neurons to handle.
Art by jlcseiles (John L C Seiles)
Retrieved from "https://dwarffortresswiki.org/index.php?title=DF2014:Nightmare&oldid=262407"
Categories:
Hidden categories: