A large person with the head of a polar bear.

Polar bear men are animal people versions of the polar bear that inhabit savage tundras and glaciers. They spawn in groups of 2-10 individuals and can pose a threat to passing civilians. In terms of size, they are almost 4 times larger than a dwarf and should not be trifled with, though they will stand little chance against an armed military squad.

Some dwarves like polar bear men for their strength. 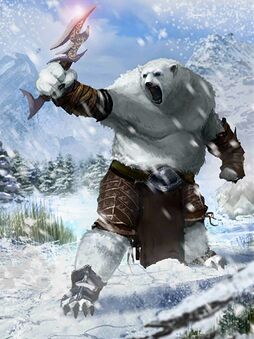 A humanoid that should be rightfully feared.
Retrieved from "https://dwarffortresswiki.org/index.php?title=DF2014:Polar_bear_man&oldid=254948"
Categories:
Hidden categories: