A feathered man with the wings and head of a bird. It lives underground.

Cave swallow men are humanoid versions of the common cave swallow and one of the races of tribal animal people who can be encountered in caverns. They stand at roughly half the size of a dwarf.

Cave swallow men live in small tribes equipped with wooden spears and blowguns which may be coated in poison, making them a threat to civilian dwarves who may need to cross their territory. They are also capable of flight, which makes them marginally harder to hit than other animal people, though an equipped military squad can make quick work of them.

Some dwarves like cave swallow men for their coloration. 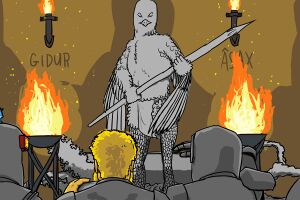