A large monster in the shape of a roach.

Giant roaches are the much larger cousins of the common large roach, found in most savage biomes. Over three times bigger than a dwarf, these insects aren't benign and will defend themselves if provoked. They lack any sort of offensive attack and rely on pushes for self-defense; however, they are large enough to potentially injure a dwarf with such attacks. Additionally, they also can use their wings for wrestling, potentially leading to the absurd circumstance of a dwarf getting throttled to death by giant disgusting vermin. All giant roaches are born full-sized adults, and with Legendary skill in climbing.

Giant roaches can be captured in cage traps and trained into pets, possessing the standard high value of giant creatures. Keeping giant roaches as long-term fortress pets isn't a good idea, however, due to their exceptionally short lifespan - they only live for one measly year. Any dwarf who adopts them as pets will find them dying very quickly, and their lifespans are too short for a giant roach farm to be viable. The player should instead consider butchering them for food and fat while they can. Giant roaches are exotic mounts and can be ridden by elves during sieges.

Some dwarves like giant roaches for their ability to disgust. 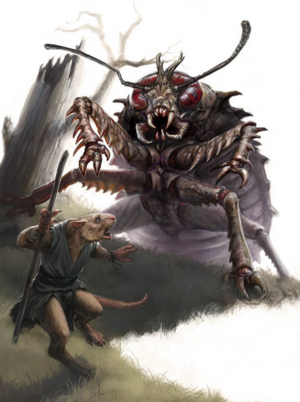 A rat man proving to be less of a vermin than the giant roach.
Art by Britt Martin
Retrieved from "https://dwarffortresswiki.org/index.php?title=DF2014:Giant_roach&oldid=265529"
Categories:
Hidden categories: