A small aggressive snake which can move very quickly. Its venom is deadly.

Black mambas are small solitary snakes who inhabit a number of tropical biomes. They are about as heavy as a cat and take 10 years to reach their max size. What distinguishes them most from other snakes is the virulence of its venom, with short-term symptoms including dizziness, drowsiness, strong pain, fever, unconsciousness, and complete paralysis, in ascending order to the size of the creature bitten. For a small creature like a dwarf, a single bite is enough to kill them within seconds, as paralysis of the diaphragm leads to suffocation.

Black mambas are also the only species of snake who is prone to rage; while they don't do it as often as animals like badgers, they have a small chance to flip out and attack any creature in their vicinity, including dwarves. Mamba fangs are too small to pierce normal clothing reliably, but with some luck they can thereafter cause some real damage to your fortress.

Black mambas can be caught in cage traps and trained into exotic pets. They are born adults and can't be permanently tamed. Their females are prolific egg-layers, making them a good target for egg production, though they are subpar in a meat industry compared to most domestic animals.

Some dwarves like black mambas for their deadly bite and their aggression. 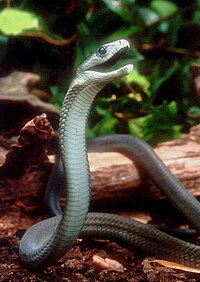 Admired for its aggression.
Retrieved from "https://dwarffortresswiki.org/index.php?title=DF2014:Black_mamba&oldid=245277"
Categories:
Hidden categories: