A person with the head and pincers of a crab.

Crab men are animal people variants of the common crab who can be found in savage oceans. They spawn in groups of 1-5 individuals and are generally content to keep to themselves. In terms of size, they are a little over half the weight of the average dwarf.

Some dwarves like crab men for their pincers and their sideways walk. 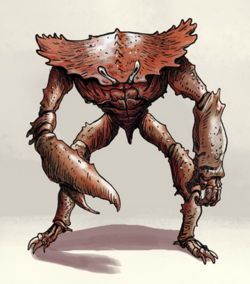 Tastes equally as good as standard crab.
Art by SBigham

Due to extensive research by ocean-based fortresses, we can conclude that crab men are, in fact, not related to the infamous cavern-dwelling Crab People. They are also known to occasionally throw an extreme sleepover party. Crab men are generally unwilling to give up any coins they have obtained, and often enlist the work of sponge men and squid men to prepare food.