A large person with the head of a hippo.

Hippo men are animal people variants of the common hippo who can be found in savage temperate lakes and rivers. They spawn in groups of 2-10 individuals and should be approached with extreme caution; a hippo man is over 13 times larger than a dwarf and can make short work of any civilian who provokes them. Do not attempt to fight them without an equipped military squad. 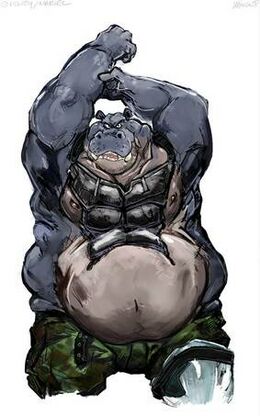 Despite popular belief, hippo men are not well-trained boxers, and are not the kings of South Pacific islands.