Giant rats are creatures found at the first two layers of the caverns and the largest counterpart of the common rat, being 8 times bigger than a large rat and 3 times bigger than a dwarf. These oversized rodents will come to your fortress and attempt to steal your food and drink your alcohol, and so should be kept away from your food stockpiles. All giant rats are born with Legendary skill in climbing, and their infants are called giant rat pups.

While large and unusual in size, giant rats are benign and will not start fights on their own. However, due to their thieving disposition, dwarves will react aggressively to their presence and often attack them on sight. Caution should be taken if a giant rat enters a populated area, as they can cause significant damage in the event they fight back. Giant rats are exotic mounts and may be ridden by goblins during sieges.

Due to their thieving behavior, giant rats are easily lured into traps by using food stockpiles as bait. If captured in cages, they can be trained into valuable pets (being as valuable as above-ground savage giants). However, due to their short lifespan, giant rats make poor long-term companions to dwarves and are better off being sold away or butchered for a nice amount of returns. Products made from giant rat parts are worth twice more than those made from common domestic animals.

Notable among giant creatures, singular Giant Rats may join groups of regular rats. Such Giant Rats become the leaders of their groups, dictating all of the rules. 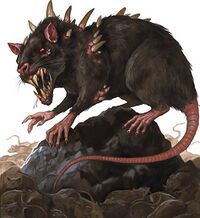