Difference between revisions of "DF2014:Bogeyman" 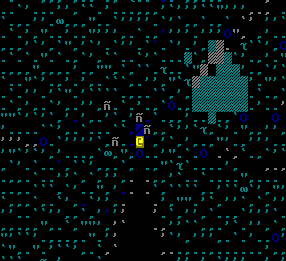 A group of bogeymen attacking a hapless adventurer.

A bogeyman ñ is a procedurally generated night creature which attacks unwary adventurers who travel or sleep outside at night alone. Both fast travelling and travelling normally on the local map trigger bogeymen. The bane of many a young adventurer, bogeymen can prove to be deadly foes for the inexperienced and the unprepared.

A number of different types of bogeyman are procedurally generated at every world creation, similar to night trolls. Their numbers are normally dependent on world size, but can be directly controlled with advanced world generation - if you prefer not having to deal with bogeymen, generating a world with "Number of bogeymen types" set to 0 in advanced world generation will ensure that no bogeymen exist in your world.

While procedurally generated, bogeymen all possess certain characteristics in common. They are all fanciful, evil-aligned humanoids with either extra or missing features; for example, some bogeymen are generated with wings and thus have the ability to fly, but this doesn't usually affect adventurers unless they too can fly. Others might be generated with appendages such as horns which can be used to gore the bogeyman's prey. All bogeymen are intelligent creatures and reading their description will reveal the bogeyman "hurls vicious insults constantly". While evil, bogeymen are not restricted to evil regions and can appear anywhere.

Bogeymen are by far the smallest of all night creatures (save transformed small creatures), ranging from 10,000 cm³ to 20,000 cm³, making the largest bogeymen only as big as a kobold. However, this doesn't mean they should be underestimated; all bogeymen possess Expert skill in wrestling, biting, fighting, striking, kicking, dodging and observing, on top of being one of the most agile types of creature in the game, which makes them exceptionally hard to hit. Bogeymen can breathe underwater, feel no exertion, cannot be stunned and are immune to pain, nausea, dizziness and fevers. Bogeymen need no food, water or sleep to survive, nor do they need to breathe, meaning they cannot be drowned or strangled. Interestingly, their raws also reveal an immunity to traps, the ability of destroying buildings and a pet value of 2,000; due to not existing in fortress mode, bogeymen never get to destroy buildings or interact with traps, and they don't possess the necessary tokens to be trained even if they did spawn in fortresses.

Bogeymen dissolve into harmless smoke shortly after being killed. Severed body parts can be picked up but they too vaporize quickly. However, it is sometimes possible to keep them if you pick them up and fast-travel away before they start smoking. They can't be animated by necromancers.

During a bogeyman attack, the "give up" option in the Esc screen becomes Give in to the night. Selecting this will end the game immediately. If you end the game in this way, you will be described in Legends mode as having died in the dark.

Fortunately, adventurers are not doomed to face bogeymen every time night falls. In fact, bogeymen can be avoided entirely by:

When you are ambushed by bogeymen, you will get the message:

You are surrounded by incessant cackling.

A turn after receiving this message, 4-6 bogeymen will begin spawning around you.

If you try to travel or sleep/wait while at least one of the bogeymen is still alive, you will receive the message:

You are still surrounded by cackling.

Interestingly, bogeymen will be friendly towards creatures with the [NOFEAR] token. Playing as one of those will make you totally safe from bogeymen; in the vanilla game, the (three currently) available creatures with this token are humanoid arachnid people: the bark scorpion man, the brown recluse spider man, and the jumping spider man. It doesn't prevent bogeyman encounters, however; sleeping in the wilderness may still result in getting surrounded by cackling, and the bogeymen will still teleport towards you, as well as prevent you from sleeping or traveling.

Bogeymen will ambush werebeasts, and are as unfriendly as anyone else toward them, but will vanish on their own within the game hour.

If you're playing as an adventurer with a speed of over 1000, you may be able to run away from bogeymen. However, there is no escaping the night. No matter where you run, the bogeymen will teleport near you if you ever get too far away. You can get rid of these pesky creatures in three ways:

The most obvious solution. However it is probably the most difficult one for inexperienced adventurers, and anyone who attempts to do this should be well prepared. Once your adventurer becomes skilled, this will become a trivial task. See the "Fighting bogeymen" section for more information.

Bogeymen will be vaporized by the morning sun, so if you can't kill them but are able to run away from them or dodge/block their attacks well, you have another option: keep on doing that until dawn breaks. Unfortunately, this can take quite a while, depending on the time of night you were ambushed.

"Shelter" here refers to (non-ruined) buildings, (inhabited or uninhabited) lairs (including shrines and labyrinths) and caves. Seeking refuge in such a place will make the bogeymen disappear in a puff of smoke. Incidentally, this is one of the reasons why townspeople encourage you to spend the night in their homes. You can find the nearest shelter by examining the map in your Quest Log.

Once you succeed in doing one of the above, you'll get the message:

The cackling fades away.

and then you can get back to adventuring.

Note that even if you successfully defeat bogeymen using any of the three methods described above, you can never get rid of them permanently, as they will ambush you again some other night if you do not take precautions.

Bogeymen are tough because they have very high agility, giving them a high speed and are naturally skilled in unarmed combat and dodging, so their punches hurt and they are difficult to hit. With low weapon skills you'll have a hard time hitting them, but once you can hit them they become very easy to kill. If you know how to fight them effectively, they will go down surprisingly easily. Here are a few tips for fighting them:

Remember, prone bogeymen are much slower, so charge at them as often as you can, so you can knock them off their feet. You could also try to sever off feet or legs, as this will make them permanently prone. If you are carrying a lot of heavy objects, it might be a good idea to drop your backpack or, better yet, throw the heavier and/or pointier objects at the bogeymen if they are not too close to you.

If you are not opposed to cheesy tactics, or just too slow to run away, you can instead block their line of sight by setting grass fires. If you can create at least a partial or full circle of fire around you, the terrestrial bogeymen will be unable to fight you. Once the bogeymen lose sight of your adventurer, it becomes a trivial game of throwing whatever can be grabbed. If you're feeling particularly vindictive, you can jump out of the fire behind them, and just behead them. Be wary of trees, as bogeymen have no qualms about climbing their way to you from above.

If you are really desperate for speed, you might also want to consider dropping your armor if it is slowing you down too much. Note that, while the extra speed might very well prove vital for your survival, you will also be more exposed to bogeymen attacks and will probably die faster if they manage to attack you and you are not a good dodger. You might want to consider keeping your helmet-a punch to the head by one of these creatures can easily ram your skull through your brain and end your life.

Despite what your imagination might imply, bogeymen are actually organic creatures. This means that they can be killed by damage to the brain, beheading, bisection (the separation of the lower body from the upper body) and excessive blood loss, and it is also generally easy to sever limbs and break bones. However, like a number of other night creatures, bogeymen do not feel pain and do not breathe, so they do not receive pain-related penalties or die from suffocation. This means that the most effective weapons to use against them are edged weapons. With sufficient weapon skill, it is easy to score a hit that will sever a limb or puncture a vital organ such as the heart. Due to their small size, it is also easy to chop off the head or the lower body, killing the bogeyman instantly.