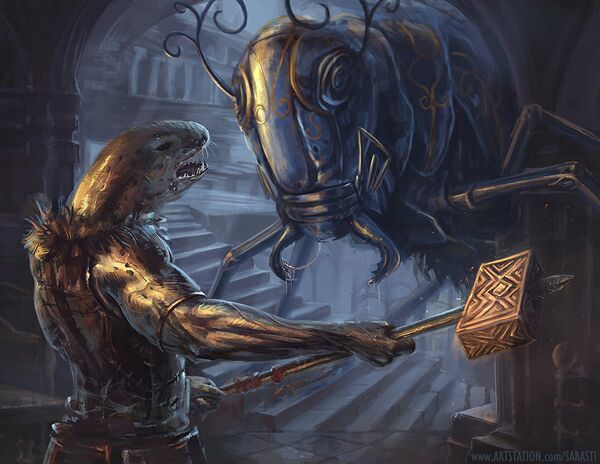 "Mudung's Monster, a towering eyeless grasshopper. It has two long, spiral horns and it never appears to be perturbed or surprised by any happening. Its indigo exoskeleton is wrinkled. It was created by the human goddess Mudung Deepperplexes and is of a part with fate." (post)

Angels Ä are incredibly powerful, procedurally-generated creatures created by deities to guard the vaults erected by demons who were twisted into humanoid form in a time before time. Facing them is arguably the endgame of adventurer mode.

Angels are randomly generated at worldgen, with appearance, arms, and armor determined by the spheres of their creator. The term "angel" is used loosely -- after all, they are sent by deities that knowingly released demons into the world. As such, they are disproportionately associated with "dark" or "violent" spheres like deformity and war, with fittingly vile appearances, but even those associated with neutral or supposedly positive spheres tend to be utterly bizarre in appearance. The War, valor and fortresses spheres boost the natural combat skills of the "Soldier" angel type to 10 from 6. The sphere effects on body materials work the same way they do for demons etc., so a muck god will more likely have mud angels, a rainbow god will more likely have crystal angels, etc. (there are about 30 spheres with material links.) Death, misery, darkness and night sphere angels can have dark color alterations.

All angels share certain traits, however. They are fanciful creatures who are all able to swim in and breathe water and destroy buildings. Furthermore, they are immune to traps, pain, fear, nausea, stunning, exertion, dizziness, fevers and any sort of poison. Unlike demons, angels do not seem to be universally immune to fire. Assistants and Soldiers are able to equip items and freely open unlocked doors. Some angels have access to a syndrome called "divine sickness", whose effects are randomized but typically include effects such as vomiting blood, blisters, numbness and nausea.

Dwarves will never have a preference for angels, as they possess no [PREFSTRING]. They possess an unused pet value of 2,000.

Even if you kill all the angels inside a vault, they will eventually respawn (no confirmation yet about how long it takes--a cleared vault has been witnessed having its population back in under a month) which makes vaults pretty good high-level training grounds. Try to kill at least one Soldier and pick up his gear. Your adventure will instantly become much easier.

Angels can't be directly encountered in fortress mode, though dwarven squads can attempt to explore a vault in order to recover the slab in it, as it's considered a legendary artifact. The guardians will defend their lair (and probably slaughter your dwarves) accordingly. However, if you successfully conquer a vault, its angels become a playable race in adventure mode.

Estimated size comparison between a group of angels (All made by the same god, Solon) and a dwarf.

Assistants (Ä or ä) are highly randomized bestial angels; though more than a match for most adventurers, they're the least dangerous angels, with low combat skills and no weapons or armor, though they are able to equip them given the chance. A vault always contains exactly 50 of them.

Soldiers (Ä or ä) are sentient humanoid foes, with armor and weapons of divine metal and clothes of divine fabric. They are guaranteed to have "Talented" level combat skills. Their size is highly randomized, and they can be larger as well as smaller than an average human. In some cases, their size difference from the player will be so marginal that they become able to use their divine clothing. A vault always contains exactly 25 of them. In some vaults, but not all of them, these soldiers have names similar to those of civilized creatures, albeit in divine language.

The Archangel (Ä) is the huge, bestial guardian of the final chamber. Only a single one of these powerful foes can be found in a vault. They stand 10,000,000 cm³, the same size as a forgotten beast, and possess Grand Master skill in wrestling, biting, striking, kicking, fighter, archer, dodging and observer, making them equivalent in power to a unique demon, or the most difficult individual foe the game has to offer. Due to this, they may very well be the closest thing to a 'final boss' in the game.

Defeating the archangel grants the player access to the slab related to the vault's demon, allowing them to either bind them to their service or banish them back to the Underworld.

Angel names are generated using a divine language. The divine language works just like any of the four major languages in the respect that it has its own translation of a set of English words. Unlike the other languages, however, it is generated individually for each world. Each world has only one divine language, meaning that all angels in all vaults in a given world will use the same language.

In the world raws, the divine language is referred to as GEN_DIVINE. By changing an entity's TRANSLATION token to GEN_DIVINE, it's possible to make them use the same names as the angels.