This article is about DF geology and the distribution of stones, and does not contain the specific locations of ores or gems. For that, as well as a general introduction to the new player, see The Non-Dwarf's Guide to Rock
For a list of stone sorted by tile, see Tilesets § Stones.

A quick note on terminology:
The term "stone" can refer to two different but related concepts, depending if you're talking about "stone" or "a stone". When referring to stone as general material, it encompasses all non-organic material that is not specifically soil, metal or gems, as in "The stone layer was mostly granite" or "The stone was dug out to make room for workshops". When referring to a stone, the round item left over from mining, it refers to the specific object of raw material that is carried to a workshop of some type, or can be used as-is for construction, and that round item can be either stone (in the first sense) or a gem or an ore of some metal, as in "The stones left over were mostly granite with some gold" or "The stones dug out had to be removed to make room for the workshops". It's usually obvious from the context, but either 1) the non-ore/non-gem stuff in general, or 2) a single unit of stone/ore/gem that can be carried away - just to be clear. 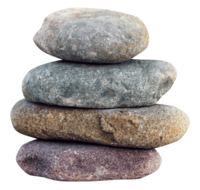 An unmined rock or stone tile is a naturally occurring solid aggregate of minerals. Mining a rock tile leaves behind a loose stone (or just "a stone") roughly 25% of the time. Other types of minable tiles include soil, sand, and clay; these tiles do not produce loose stones when mined.

Loose stones are divided into a few key categories:

Having created loose stone, most of the time you'll want to get rid of it, or at least move it someplace else. See stone management for advice.

If you are having the opposite problem, and find yourself running out of stone, try making stone blocks.

There are four types of stone layers (plus soil, which is not stone). The type of layer is the primary indicator of what kind of ores you are likely to find on the map, as well as a sign of volcanic activity.

The primary types of rock only occur in their own layers. (e.g. you won't find limestone in a marble layer.)

These types of stone occur as entire layers, containing some veins and pockets of other minerals (see below).

Stones found on this table will occur as pockets and veins inside their respective stone layers (see above). When your miners newly encounter one of them you will receive an announcement, even for the ones that have no use other than to build constructions of unusual colors. Note that the veins or clusters can spread into other layers, and may cause some layers to contain stones they usually wouldn't. A few of these stones, such as olivine, have other, more interesting minerals appear inside them.

The following table does not contain ores and gems.

For those concerned with aesthetics and wanting to know which stones are available in each color.

The geology and stones of Dwarf Fortress are based (to some extent) on real-world geology and mineralogy. To understand the terms used here, you may want to crack open a geology textbook (a high school one should suffice). If you don't happen to have one close by, the Wikipedia articles for geology, mineralogy, or the terms in question might help. Below is a very brief introduction tailored for DF gamers, with links to the relevant game-specific pages.

In geological terminology, a rock or stone is basically a composite of minerals. Minerals, the building blocks of rock, are hard inorganic materials with a definite chemical formula and a certain atomic structure. For example, the mineral quartz is composed of silicon dioxide (SiO₂) arranged in a pyramid structure. Quartz is a component mineral of rocks (stones) such as quartzite (almost entirely made of quartz) or granite (some 20~60% quartz, a bunch more of the mineral "feldspar", plus mica and some others). The distinction between minerals like mica (simple) and rocks like granite (composite) does not matter for Dwarf Fortress; just like in everyday language, they're all just "stones". Besides minerals, some rocks may include organic material; such rocks include bituminous coal (made of dead bog things) or limestone (made of the skeletons of ocean animals).

The three minerals seen in granite are also among the most common:

Other minerals that exist independently in DF include green olivine (yes, it's named after olives) and black hornblende, which is similar to dark mica but forms needlelike crystals. Dark minerals like these often include magnesium and iron (Fe); stones rich in them are then termed mafic (in contrast with "felsic"). In-game mafic stones include basalt and gabbro.

On the white side, calcite is a mineral based on calcium, the same stuff as bones. It forms crystals, and occurs in DF as an unremarkable white stone. Calcite is a main component of limestone and chalk—which in turn can become marble; it's often formed from the accumulated remains of ancient marine animals (for a memorable use of chalk stone layers in high fantasy, check out Terry Pratchett's novel The Wee Free Men and its sequels). The most well-known marine mineral is surely table salt, present in DF as rock salt. It's formed when saltwater evaporates; another evaporative mineral, or "evaporite", is gypsum, which, in DF as in real life, can be used to make plaster casts

Rocks can be classified by their creation processes, which makes them settle down in distinct stone layers, and possibly in veins and clusters. DF models this too, so that it's quite relevant information for players; see the links for details.

An ore is a rock with a metal content high enough for it to be a viable source of that metal. Most metals do not occur by themselves in nature, but readily bind with minerals to form stones; e.g. zinc binds with sulfur minerals to form the rock sphalerite. To extract the metal from it, someone has to smelt the stone. A few metals may be found in pure form, like native gold and silver (but in DF, they still require smelting to be shaped into useable bars).

A gem is a mineral (or rock, or rock-like material) with intrinsic economic value for a culture, often because they're beautiful, durable, and/or rare. This depends not just on what the mineral is made of, but also on the internal layout of its atomic structure, which can dramatically alter its appearance and properties; see the article on gems for more.