For "blocking" in combat, see Armor. 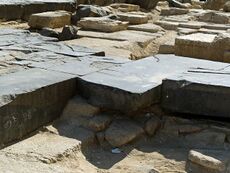 A block is a type of building material that is more architecturally efficient than their non-processed counterparts. Blocks are lighter, faster building, and more valuable. This makes blocks especially useful for large construction projects.

Stone, wood, glass, ceramic, and metal blocks can be created respectively in a mason's workshop, a carpenter's workshop, a glass furnace, a kiln, and a forge. One stone boulder can be shaped into 4 rock blocks, which makes stone even more attractive to use for larger constructions. All other materials only produce 1 block/task, but a wood block is lighter than a log, and all blocks share the advantages in construction and value. Ceramic blocks are called "bricks", though they behave the same as all other blocks.

Blocks can be used as building materials for roads, bridges, workshops and constructions. When a raw material (e.g. stone boulder) is used instead, the game will describe the result as "rough", while buildings built from blocks are not given that adjective. Additionally, blocks are required to build wells, screw pumps, and asheries.

Even though blocks are quite useful in terms of construction, they cannot replace other functions of the raw material. E.g: Stone blocks cannot be used for making furniture or craft goods, tools such as pots or jugs, mechanisms, or catapult ammunition. Nor can wooden blocks be used to make furniture, craft goods, tools, siege weapon components, ballista arrowheads, or crossbow bolts, or be burned at a wood furnace. Metal blocks can't be used for metalsmith's forge jobs but can be melted down at a smelter.

The clearest distinction between a building built with a boulder and a building built with a stone block is that more buildings can be built of blocks, as each stone produces four blocks. Note that this does not apply to wood, glass, or ceramic blocks/bricks, which are only made in sets of 1; metal blocks are also made in sets of 1, but since you get 4 bars at a time from smelting ore, the end result is equivalent to stone.

Blocks have less volume, and thus weigh much less than raw forms of construction materials - stone blocks weigh only 6% as much as a boulder, and wooden blocks weigh 12% as much as the log from which they are carved. This weight difference can dramatically reduce hauling time, especially if you are using large amounts of materials. Forming metal bars into blocks makes no difference in regards to weight, though it does simplify the tracking of resources - if you use metal bars to build workshops and constructions, your stocks screen will still list them in the summary view, potentially misleading you into believing you have more available bars than you actually have.

Building a bridge out of blocks instead of rocks also cuts the building time by two thirds, independent of clearing and hauling time. This difference in building time presumably extends to other buildings and constructions where you can choose between blocks and rocks. The appearance of bridges and paved roads will be different depending on whether blocks or rocks are used. The use of blocks is indicated by the floor tile +, and the use of rocks is indicated by a rough ground tile ≈.

Unlike raw stone or wood, up to 10 blocks can be stored in each bin in bar/block stockpiles, which can improve hauling time between stockpiles. A minecart can carry up to 83 blocks.

Blocks are more valuable than rocks, having a base value of 5, compared to the raw material value of 3 for stone, wood or glass, while metal bars already have a base value of 5. This, combined with the yield of 4 blocks per stone, nets a value increase of 17 when using basic stones for blocks.

Metal ores and economic stone will still produce multiple stone blocks if cut in a mason's workshop. However, this breaks use for any purpose other than building and strange moods, such as reactions: blocks of flux cannot be used for making pig iron or steel, nor can blocks of ore be smelted into metal (without modding reactions). Note that "filler" blocks of raw adamantine are excellent for increasing artifact value without wasting too much adamantine on legendary doors, tables, etc.