A screw pump is a small building that can lift liquids (water or magma) from one level below onto the same Z-level as the pump. It is two tiles by one tile in size, and it can be either manually operated by a dwarf with the pump operator job or by being powered by water wheels and/or windmills.

The direction you want the fluid to travel must be chosen at the time of construction. Pumping only occurs in a straight line, and involves a total of 4 tiles in a row - 1) the liquid source, two for the pump, and the output (details below, under Construction).

The "rise" in levels occurs on the first tile, the intake side, from one level below up to the level of the pump*. Pumped fluids can and will flow immediately after being pumped, as normal for that fluid. Pumped fluids will have a pressure equal to the exit z-level - a pump never "forces" water to a higher z-level than the output tile.

Building a screw pump requires an enormous corkscrew, a block, and a pipe section. The construction itself is completed in two stages: first, an architect must bring the materials and prepare a design plan, then a builder (possibly the same dwarf as the architect) with the appropriate labor must assemble the components accordingly. This could be carpentry, metalsmithing, or masonry, depending on the material of the block. The architect and the assembler must have access to the where the light-colored tile will be. 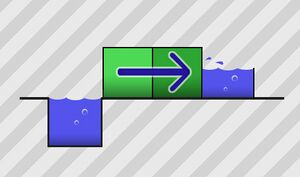 Basic Side View of a Pump.
This pump "pumps from the west to east", flowing from left to right. The area to the right may fill to the top of that level, but no more (See pressure; see Pump stack). Note that the entire space required is 4 tiles long by 1 tile wide, not including any retaining walls for the outflow. If pumped manually, the pump operator stands in the light-colored area, as the dark-colored tile is impassable to both fluid and movement.

(Although the "liquid" is shown as blue, this can work for magma as well, with the appropriate precautions.)

Although the screw itself is only 2 tiles long by 1 tile wide, the entire system must be thought of as 4 tiles long (see diagram, "Basic Side View of a Pump", right). This consists of (left to right)... 1) a liquid-source tile (where the liquid is, -1 z-level below), 2) the lighter-colored "intake" end of the pump itself (where any pump operator stands), 3) the darker-colored "output" end of the pump, and 4) the tile where the liquid will be deposited, which is on the same level as the pump.*

(* It's easily possible to dig down to let that output liquid drain away, but it starts on the same level as the pump, +1 z-level above where it started. It's also possible to include walls to prevent the liquid from spreading, and this is recommended if you do not have a reliable drain system.)

To build a pump, use the keys b-M-s. It's important to choose the proper orientation for your pump (to specify the source and destination tiles) using the u, m, k, or h keys, with text at the top of the sub-menu changing to confirm your choice. The default (as shown above in the sidebar), "pumps from the north" (top). The light green X must be next to the liquid source and the dark green X is where the liquid exits the pump.

The two-tone green graphic shown at the very top-right of this page "pumps from the north" (top) to the south (bottom), and is closer to what you will see in-game. If pumped manually, the pump operator stands on the light-colored tile, as the dark-colored tile is impassable. Orientation is visible after placement by using query over or near that pump, or during placement. Orientation of a pump cannot be changed after being constructed, but, as with any building, it can be deconstructed into its component parts and rebuilt with a new orientation, and/or a new location.

Construction of a screw pump can be prohibited with a "needs screw trap component" message if your enormous corkscrews are in a bin which has any current tasks attached to it (such as the relocation of a newly constructed corkscrew, or a military member moving a weapon). One workaround is to create a separate weapon stockpile for your corkscrews, and for best effectiveness, disallow the use of bins in that stockpile. This will force your corkscrew storage to work as smoothly (and space-consumingly) as a furniture stockpile. 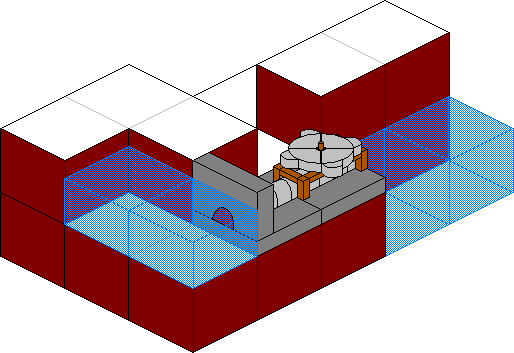 This screw pump delivers water (or magma) from the lower level (on the right in this diagram) to the same z-level as the screw pump (on the left). When placing the screw pump to be built, the "dark green tile" would be on the left - that entire tile is impassible to movement and fluids. 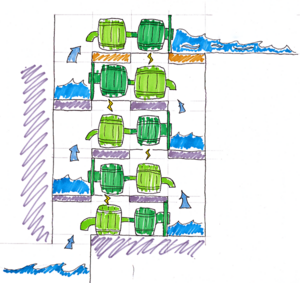 Illustrated Side View of a Pump Stack. 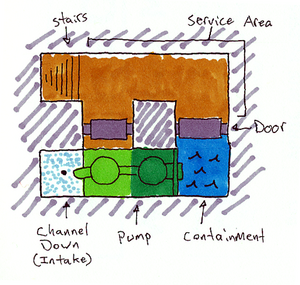 A pump stack minimizes the amount of machinery required to lift water or magma by allowing for power to be supplied directly to only the most accessible pump (typically the topmost) which in turn allows the player to operate a stack limited only by how many windmills/water wheels they can fit into the area. The price of optimal parts density is fragility: each pump relies on the pump below it for support. If anything breaks a pump in your stack, every pump above it will be disassembled. This means that a single pump accidentally assembled with non-magma-safe parts can cause an entire magma pump stack to spontaneously disassemble.

To prevent such a disassembly cascade, you can "anchor" each pump with a mechanism or stable horizontal axle. For water applications, placing this axle on the output tile of the pump also conveniently prevents plant growth; for magma applications, the axle must be protected from the magma, unless you are using nether-cap.

Typical applications for a pump stack include moving magma from a lower level (often the magma sea) up to a convenient level for forges and furnaces, extracting water from a flooded fort, raising water for a decorative waterfall (and extracting it afterwards), or any other purpose that requires water/magma on a z-level significantly above its current location.

The 'Illustrated Top View of a Pump Stack Layer' shows a basic section of a pump stack. Only the door (or a floodgate) on the containment side is strictly necessary in order to prevent flooding. Two doorways are used here, each lining up with the solid ground within the pump assembly, in order to prevent workers from trapping themselves after digging channels or assembling the pump.

Be warned: pump stacks move water fast. If you are pumping from a large reservoir into an open area, be prepared for a huge outflow, roughly akin to the kind of water dump you'd get if the whole reservoir was balanced above the pump output and then released. If you are using pumps to empty a large underground reservoir (or, say, a flooded fortress) onto open land, use an aqueduct or some other method to make sure the pump system outlet is a good distance away from anything you wouldn't want to get drenched.

As an alternative to a large reservoir, it is also possible to combine a Dwarven Atom Smasher with the top layer of the pump stack to create a "vacuum cleaner" of sorts.

Because a pump stack pumping magma is known to cause significant lag, a new type of pump stack was developed by NecroRebel that causes a much smaller drop in FPS. Changing the single tile magma chamber at the output of every pump from a 1 by 1 to a 3 by 3 area reduces the lag to 1/15th of that caused by the original pump stack. The designer hypothesizes that the larger chamber requires many fewer temperature calculations when magma is pumped in or out; that also implies that there will be no FPS improvement for water pumps by using this design.

Newer breakthroughs in magma pump design have since made the 3x3 reservoir design obsolete. Testing has found a 1x3 head-over-tail variation (which is very similar to the typical 1 by 1 pump stack) as well as a 2x3 head-over-head variation. Both of these new designs require less space and work as effectively as his original 3x3 reservoir head-over-head design, with no significant drop in FPS. The 1x3 head-over-tail design has the advantages of requiring the least amount of space and being simple to refit from the standard 1 by 1 water pump stack.

From the components used in construction, a DF pump can be imagined as a simple archimedes screw. However, given its effect on contaminated water, the lack of pump components *in* the water itself, and general dwarven mechanical aptitude, it seems more accurate - and more dwarfy - to infer the speed of rotation to be high enough that the building actually operates as a turbopump using the principle of vacuum distillation to simultaneously transfer and purify water. Some Dwarven historians say that ancient screw pumps were also used as a torture device used to interrogate goblins and hippies. 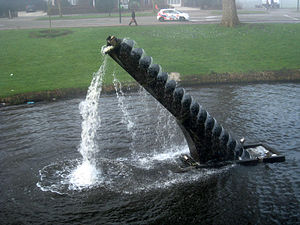