A floodgate is a gate which allows control of the flow of liquids, such as water or magma. They are operated by mechanisms, such as levers or pressure plates, which open and close them. When closed, they behave like walls, but when opened, allow liquids, objects, and creatures to pass over them. Closed floodgates are shown in-game as "X" symbols. Open floodgates are completely invisible but could still be seen through "Look" menu or selected through "Set building Task/Pref". They can be manufactured from stone (at a mason's workshop), wood (at a carpenter's workshop), metal (at a metalsmith's forge), or glass (at a glass furnace). Once manufactured, they are built in the desired location using the keys b, x.

In most situations, simply using a door or raising bridge can be used in place of a floodgate - the latter of which provides a number of significant advantages. 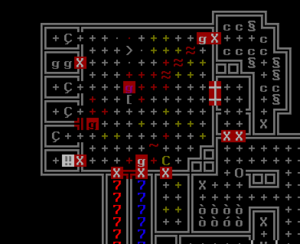 Colossus in Arena
This image depicts some orthodox and unorthodox uses of floodgates to control the mixing of creatures and liquids in this arena. The gates, shown in-game as X, act as liquid stoppers and jail doors.

Floodgates are used to control the flow of liquid. Because of the usefulness of certain liquids and the danger posed by others, floodgates have a wide range of applications in any dwarven settlement.

They are instrumental in controlled irrigation for farming, or controlled flooding for drowning annoying visitors.

Floodgates also block the flow of liquid on the Z-axis, as they are considered walls when closed. This can be quite useful when built directly below a floor grate as this will allow you to quickly empty the liquid from the floor above without the danger of its precious contents rummaging through your sewer system.

Floodgates are constructed orthogonally on a solid, completely flat, unflooded floor in the 'closed' position (Note that this means it is possible for careless dwarves to trap themselves on the wrong side of the gate). Adjacent walls are not necessary for placement, but are necessary for controlling liquids. A mechanic must then link up a lever or other triggering mechanism to the floodgate. This requires two mechanisms; the mechanic will haul one mechanism to the floodgate, work for a while, and then haul the other mechanism to the trigger to complete the task.

You can build a floodgate over empty space, e.g. controlling water in a vertical path. First build a floor (b, C, f), after it is complete mark it for removal (d, n) and immediately designate your floodgate (b, x). You don't have to suspend either of these tasks to get both to complete. You may want to remove the stone or block left by removing the floor or it may be washed down to lower levels, possibly clogging another floodgate that is built on a floor or door.

Floodgates will resist magma when closed, just as a constructed wall would, but when opened, will be destroyed if they are not made from magma-safe materials. The mechanisms used in the construction of the floodgate must also be magma-safe to prevent this.