Fortification is a construction that allows the passage of projectiles [in and out] and liquids, mist, steam, webs, fire, miasma and smoke, but in theory not creatures, making them an important part in a fortress's defense. An archer must have a skill level of accomplished or higher to shoot through fortifications from a distance; otherwise they must stand directly next to the fortification to shoot through it.

Fortifications allow liquids to pass through in any direction except vertically -- they implicitly include a floor (even when constructed over empty space) so liquids will not fall out their bottom. 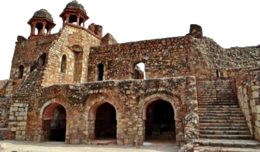 Flying creatures can of course fly over fortifications (but not through). If there is open space above your defense positions, you can either carve them out of walls in the first place or build floor tiles on the Z-level above as a roof against fliers. This is generally sound advice as dwarves don't like rain anyway and strange accidents can cause the weirdest things to fall from above. Note that fliers can diagonally bypass a fortification if the tile above the fortification doesn't have a floor.

Enemy archers may also fire back through your fortifications. Enemies that stand directly next to your fortifications can fire inward, therefore it's recommended to build a moat around your fortifications, or elevate them from the ground level. Enemy elite bowmen and crossbowmen have sufficient skill to fire through your fortifications from any distance within their range and they will shoot right through every time and (likely) decimate your forces. Elite bowman can be defended against without compromising the usefulness of a fortification network by constructing a thin 1-tile wide raising bridge just outside the fortification. Attach each bridge to a lever and pull the lever if an elite goblin poses a threat. The blocking bridge will cut off line of sight and prevent bolts from penetrating your defenses.

Melee combat can cause severed body parts of the combatants and their carried items to become stuck inside nearby fortifications. Items moved by flowing water may do the same. Dwarves cannot directly recover these items, which can cause problems with clutter and especially miasma. The easiest solution is to destroy and reconstruct the fortification. Same applies to objects falling from above, thus if a fortification is used to e.g. protect a water sink, installing a floor grate above it may be a good idea: it will catch most stuff that would end up stuck in the fortification. It's not as simple with horizontal movement, but sometimes a line of vertical bars or grates may help - if something gets stuck in them first, at least that place can be made accessible simply by flipping a lever, then closed again just as quickly.

Fortifications combined with windows can enable dwarves or their animals to watch for stealthy intruders from safety. As constructions, fortifications are immune to building destroyers, yet they allow enemy archers to murder your watch-chickens. Windows will stop arrows, but as buildings they're vulnerable to building destroyers. Combined correctly, the two can provide a see-through barrier that protects your watch-animals against any enemy, with the possible exception of an enemy that breathes fire. With enough animals on the job, this setup will reveal all ambushes and many a thief. Note that since this eats 2 tiles of 3 maximum detection range, stealthy units can't avoid it altogether only in 1-tile wide (2 if observed from both sides) corridors. Its major weakness is the problem with body parts getting stuck in the fortifications. Alternatively, one could watch from above through floor grates.

Curiously, a fortification carved into a tile at the very edge of the map will allow water or magma to drain through it and off of the map.

In adventurer mode you can throw any item (such as bows, arrows, axes, hammers, shields, body armour, severed limbs, corpses, etc.) through a fortification, but you cannot climb through them.