To make an archery range,

The room can then be used by military dwarves who have no order (i.e. they're set to inactive or set to only active/training)Bug:6070 in their schedule that month, in order to train ranged weapon skills. Since bolts are being used up by this training, it may be a good idea to set the dwarves to only use bone or wooden bolts when training.

Unlike other rooms, archery ranges only include the archery target from which they were defined - if you have multiple targets in one area, each one must be designated as its own archery range, even if this causes them to overlap. 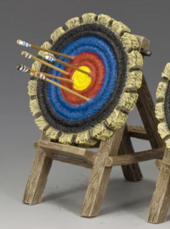