Ramps are shown with the ▲ symbol (pointing "up"). The space above a ramp is shown as a ▼ and called a "downward slope". A downward slope is not an actual feature (as opposed to a downward stair), but rather an indication of a ramp below it; it functions otherwise as open space -- much like the game shows · to indicate trees or terrain on the level below, the ▼ symbol is a display nicety, not a type of terrain. When the rest of this article refers to ramps, the actual ramp (▲) is meant.

For the purposes of unit movement, a ramp connects the ramp bottom to the tops of walls adjacent to the ramp bottom. So unlike stairs, where a dwarf moves directly up or down, a dwarf moving via a ramp will move diagonally across Z-levels, changing both horizontal and vertical location in a single move. This can make it seem like a ramp has "direction" or "flow" by itself, but in fact this depends entirely on the spaces adjacent to the ramp. 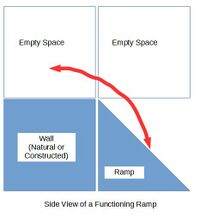 These conditions mean that if one were to try to create a "stairwell" with ramps, one would have to place the ramps adjacent to one another across Z-levels, rather than underneath one another as they would when building stairs. Each ramp would also have to be supported by a solid tile on the Z-level beneath it; this means that a sequence of ramps will become unusable if, for instance, the player attempted to make a 180º turn and build one ramp on the Z-level directly beneath another. The dwarven fortresses created during worldgen provide examples of ramp implementation, generally using ramps for the main entrance stairwell into the fortress, as well as when changing elevation in the tunnels they build through the caverns. 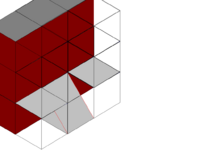 Note: Fortifications can be used by ramps as the adjacent "solid" tile, provided those fortifications have a walkable space above them (which would apply to all carved out fortifications, or those constructed with additional flooring).

Digging ramps can be accomplished in two ways. Dwarves can carve ramps from any of the 8 adjacent spaces on the same z-level. Dwarves can similarly channel down from above, which will carve a ramp out of the natural wall below (if any). In both cases the space and floor above the ramp will be carved out as well to make an open space. Note that a stone may be left from the material on the level where the ramp had been designated, but a tile simultaneously dug above the ramp will never generate a stone; the upper level must be dug out separately for that chance.

Natural and carved ramps can be destroyed via the designation menu using the Remove Up Stairs/Ramps selection (d -> z, using the ingame interface). Like the selection says, only upwards slopes (and carved stairs) can be removed in such a manner, and only from the same level as the (upward) ramp. Selecting a downwards ramp in such a manner has no effect, and removing the upward ramp will automatically remove the downward ramp designation from the level above, replacing it with "open space". Ramps at the edge of the map cannot be removed this way (however, you can b -> Construct floor on top of that ramp and deconstruct it later - it will remove the ramp).

Removing ramps is a fast process, on par with digging through sand or soil, and can train your miners quickly.

Constructed ramps can be removed like any other construction via the designation menu with the Remove Construction selection (d -> n).

Unlike stairs, ramps do not work well with hatch covers. A dwarf standing on a hatch cover over a ramp will drop items he is carrying if the hatch opens, possibly injuring any dwarves below.

When digging shafts, ramps don't provoke climbing as easily as channels (which will do so in about five levels).

You can channel bare floor with no wall (or only a pillar) below, resulting in a hole with no ramp. Falls can still hurt, though.

Digging progress only accumulates in revealed tiles, which means ramps or channels will behave differently when digging gets interrupted.

A ramp can be dug diagonally upwards while standing on a ramp, thus allowing you to reach 2 z-levels above the miner. This can be done even if there's a building, such as a bridge, above.