(For information on the wagon carrying your goods during embark, see Wagon (embark).)

A rolling platform for carrying passengers or cargo. 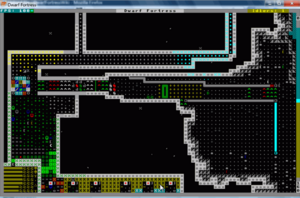 A depot in the fortress, with a narrow, trapped accessway.

Composite image of depot access screen. Strategically arranged walls and natural obstacles (boulders) force wagons to enter and exit the map immediately to the east of the depot.

Wagons are special creatures used by caravans. Both Humans and dwarves are meant to send wagons with their caravans, which have a much greater capacity for bringing foreign imports and accepting dwarven exports. Unfortunately, wagons require paths that are three tiles wide to pass. If wagons are unable to find an open path to your trade depot (or if you have not built a depot at all), they will "bypass your inaccessible site" and you will only be able to trade for what is available on the pack animals.

Wagons cannot cross doorsVerify (even if the doors span an area ordinarily wide enough for the wagon to pass) or upward or downward stairs, though wagons can move across downward stairs covered by a hatch cover. Obstructing boulders must be smoothed ( d - s ), and trees must be cut down ( d - t ). Shrubs do not obstruct wagons, and neither do ramps, bridges, roads, or floor tiles. (However, ramps covered by a hatch do obstruct.) The impassable tiles of workshops and other buildings will obstruct, but the passable tiles of those buildings will not. Any buildings which are normally passable, including restraints and traps, will not obstruct wagons either, nor will creatures, whether restrained or free.

To keep trees from growing and blocking a path, you should build roads, bridges, or floor tiles over any soil tiles that make up part of the path. Ramps must be used to adjust z-level elevation.

After a trade depot is built, you can use D to check wagon accessibility. The decisive element is that you see the 'depot accessible' message on the right. Accessibility is calculated from your depot, not the edge of the map. Even though you see a green area around your depot, it may not be accessible. You need to make sure the path extends all the way to some edge of the map. The display is somewhat misleading in that a one tile wide green path is sufficient for the 3 tile wide wagons; the green Ws represent only the center of a wagon although the whole 3x3 can fit around it - so a three-tile wide path, which can fit a wagon, will only show up as one-tile wide line of Ws. When the route they would take goes over hills (ramps), it's hard to eye whether it is continuous all the way to the edge of the map, so be sure you see the words "depot accessible" on the depot access screen.

As long as you have a three-tile wide path to the depot that reaches any edge of the map, wagons will be able to reach the depot. If there is only one path they can take, they will take that path. You can force them to enter and exit the map in an exact spot -- preferably very near your depot -- by erecting walls or digging channels so that all paths but the one you want them to take are blocked. Note that caravans will always prefer to enter the map at a wagon-accessible point if one exists, so this can also be used for Elven caravans as well.

Note that wagons use different rules for movement on ramps - namely, they are able to ascend a ramp to a raised floor over empty space, but cannot cross the line of ramps while remaining at the same level. With some careful design it is possible to make bridges that control depot accessibility without actually allowing anything to cross them, or paths that can be traversed only by wagons but not dwarves or vice versa.