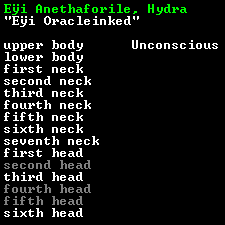 Decapitation: the least efficient way to fight a Hydra, but excellent training for weapon skills.

A hydra has the ability to destroy buildings. It seems that it neither destroys nor avoids traps, and can be eliminated just by having about 50 stone-fall traps in its way, or one simple cage trap. When a hydra appears, the game pauses just as it does when a forgotten beast appears.

Hydras do not grow two heads out of the wound when a head or neck is chopped off.

Hydras are dangerous for several reasons including their massive size, inhuman strength and propensity for biting people in half. The main difficulty in killing a hydra lies in its many heads; like the Giant cave spider, Hydras have the annoying habit of protecting their vital bits using walls of redundant flesh, their 6 superfluous necks in this case. This means that there is a very good chance that you'll be impotently hacking away at one head while another shakes you around by the bloody sieve that used to be your torso.

In adventure mode, the best thing to do is to set your combat preferences to "dodge" and attempt to break any bite the Hydra manages to get into you. Keep your back to a wall or tree so that a charging Hydra will get knocked down when you dodge out of the way. Rather than trying to dispatch the 7 heads one after another, stabbing the Hydra's upper body with a pike will bring about its demise much faster. The small contact area and high penetration depth of a pike will easily generate mortal wounds to the lungs, and with luck, can also damage the heart and spine too. Once its breathing is hindered by perforated lungs, the Hydra will suffocate to death in short order.

In fortress mode, hydras are usually more than a match for any dwarf, and the difficulty is compounded by the lack of targeted attacks and limited availability of pikes. They are still quite slow and vulnerable to pain and bleeding however, so attacking en masse with edged weapons can still work if traps are not available.

Alternatively one may, GET UP ON THE HYDRA'S BACK!