A huge monster with an enormous tail, covered with thick fur. They run on four legs and can be found deep under the earth. 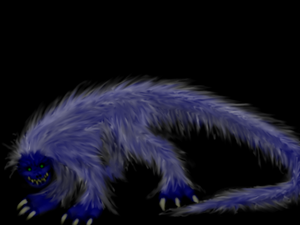 Admired for its enormous tail.

Rutherers are very large creatures who reside underground in caverns. The value of their body parts is multiplied by three, making them a great target for your butchers. Their size, however, coupled with the fact that they can appear in groups of two to three makes them a real danger to even experienced adventurers. Knocking you to the ground with charges and then severely wounding you in some lasting way is common.

They are tameable, but it requires a Dungeon master noble. Rutherers can also be tamed by goblins and dwarves in world-gen, resulting in rutherers accompanying goblins on sieges as mounts and being used in worldgen battles by both civilizations.

They also *can* give birth to triplets.

They aren't aggressive unless you attack them or they are accompanying goblins during a siege or similar.