A fearsome, long-toothed mouth the size of a man's head, flying on bat wings. It is found in deep caves. 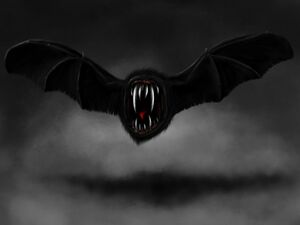 Admired for its terrifying features.

Hungry heads are found in the third cavern layer in groups of five to ten individuals. They are similar to crundles and troglodytes in their abundance and lethality, being different only in that they can fly and have only three outside body-parts (a head and two wings). They do not pose much danger to either adventurers or civilian dwarves, though their ability to fly can make them a job-interrupting nuisance in fortress mode.

Hungry heads may not be tamed.