Bones are internal (or less commonly, external) rigid organs that make up the skeletal structure of most living creatures. Therefore, they're a common form of animal remains, as well as a handy crafting material.

Any time you butcher an animal with a skeleton at a butcher's shop, you will produce bones along with several other products. This applies to full corpses, severed body parts, and even fully decomposed skeletons. Alternatively, if a severed body part is allowed to fully rot, it may leave behind a stack of usable bones without ever needing to be butchered. Note that many civilizations (like dwarves) consider it unethical to butcher certain skeletons Bug:1180.

While unmodded dwarves are unwilling to butcher sapient creatures, severed limbs will rot to bone stacks even without butchering. These bones cannot typically be used for crafting, however the bones of undead invaders are sometimes usable by dwarves. This is presumably a bug.

Bones are never imported in caravans, and must be acquired locally.

The majority of the uses for bone are handled at a craftsdwarf's workshop using the bone carving labor:

At a bowyer's workshop, using the crossbow-making labor:

Apart from the manufacture of leggings and greaves, each bone-using job consumes only one bone from a stack. Greaves consume three bones per job, making it ideal to craft greaves from lower-value bones and everything else out of higher-value bones if you plan to export the non-masterwork items. The difference is only about 25% in value, but it adds up after making hundreds of items.

Bone greaves are among the best items to make because metal gauntlets and high boots give a positive return for melting while greaves do not. Metal greaves are also very heavy. Bone greaves can be combined with a metal helm, gauntlets, high boots, and leather armor (with optional mail shirt) to make a relatively light-weight, full-coverage uniform for an all-civilian military.

Dwarves in strange moods will occasionally require bones, sometimes even multiple stacks of them. These dwarves will always take an entire stack independent of the number of bones in it.

As the number of bones per stack has no influence on the value of the resulting artifact, it may be worth guiding your moody dwarf to use smaller stacks. This may be achieved by creating stacks of single bones before a strange mood happens and forbidding all other stacks of bones when you get the notice of the dwarf having claimed a workshop.

(Note that while it is not directly possible to unstack bones, it is possible to use bigger stacks to craft goods until only one bone remains.)

While bones are counted as "body parts" in the stocks menu, they have their own subcategory in the refuse stockpile menu. Be aware that stockpiles with "refuse" enabled automatically degrade some items (clothes and armor) quite quickly; refuse should not be enabled in a multi-purpose stockpile. Refuse stockpiles also cause the degradation of stored body parts (such as bones and shells), though at a much slower pace. Bones stored in a refuse stockpile will decompose even more quickly if subjected to vermin such as rats; consider pasturing a cat over the stockpile to minimize decay.

Adventurers will come across bones every time they butcher the corpse of a creature with a skeletal structure, and can use them to create wearable jewelry and salable trade goods. To do so, equip an item with a sharp edge, stand over a stack of bones on the ground, press x, choose "Create," choose "Carve Bone," choose the item you wish to make, and finally select the bone type you wish to use. You will produce the item instantly, no workshop required.

So long as you're successfully hunting animals, this will net you a significant amount of wealth to trade, especially once your bone carving skill rises and you start producing higher-quality items. If you have enough strength to handle a little extra weight, the jewelry is also worthwhile, acting as a very minor form of armor and potentially deflecting enemy attacks. It is not currently possible to produce actual bone armor in adventure mode, however.

Actually, bones do get transported, but the stupid bodies they're transported in need to be removed first. 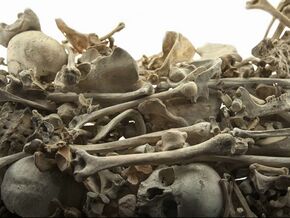 New bracelets, crafts and earrings are only a death away.
Retrieved from "https://dwarffortresswiki.org/index.php?title=Bone&oldid=288473"
Categories:
Hidden categories: